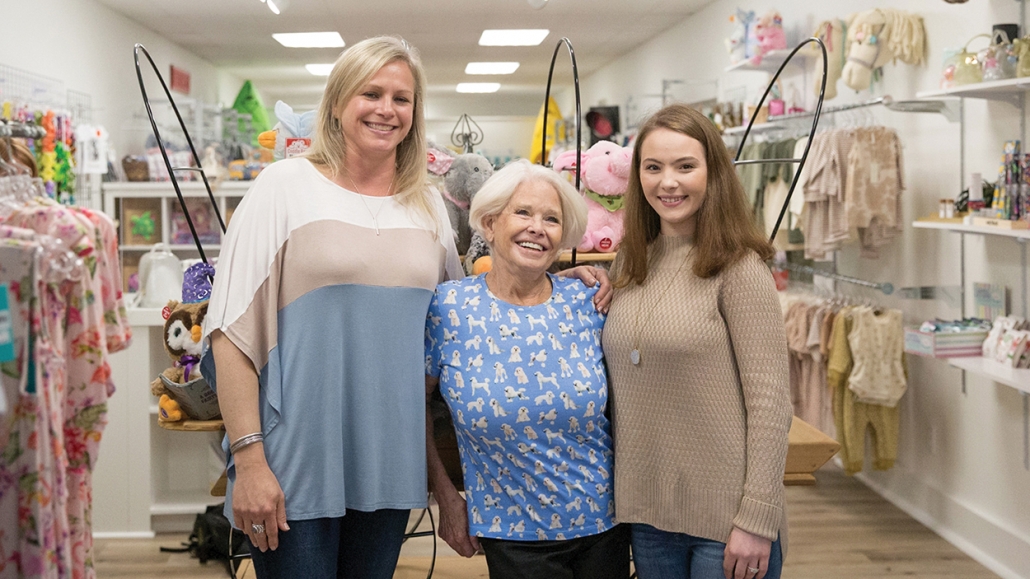 The logo at S’more Kids Klothes captures the store’s whimsy – two children holding hands with a poodle in tow.

It’s drawn from a photo of the shop owners’ grandchildren taken when they were younger, as they walked down a mountain trail.    The dog in question is the couple’s beloved Marni  – she’s been greeting customers at the shop for more than a decade.

The name on the door – an homage to everyone’s favorite campfire treat.  Inside the store, clothing for children, merchandise as beguiling as the name,  is displayed amidst equally delightful locations for child play– fun stations where youngsters can make their own Spa Bubbles, Lip Gloss, and Mad Lab body wash.

Clearly, owners Sharon and Tom James know how to please the younger set and, as importantly, their parents and grandparents.

The James’ have a long history on the Plateau.  Tom’s family owned the historic Old Toll Gatehouse in Cashiers, and he spent summers there beginning in the early 1960s.   Tom and Sharon visited Cashiers not long after the house sold, and when she fell in love with the area, they decided to buy a home at Holly Forest. Once Sharon retired from a career in politics, working for a prominent Florida Senator, they started spending more time in Cashiers.

The idea for S’more Kids Klothes sprang from Sharon’s awareness that there was a need for a kids store in town, and they opened in 2011.   Business immediately took off. The following year they moved to a bigger location, and a few years later, they purchased the building across the street from the Cornucopia Restaurant and opened a second spot, “On the Hill” in Highlands.

But the dream was always to own a place on Main Street in Highlands.  This year it became a reality with the launch of their store at 383 Main Street in the former Suzette’s.

Sharon’s focus remains customer service and the offering of affordable, appealing, and quality clothing for newborns through age 14.  And as the children Sharon has been dressing for a decade are now in their teens, they have expanded their offerings to include tween and junior sizes.

And for those families just visiting or residents expecting visitors with young children, S’more Kids rents cribs and highchairs.

In the years since opening, the James’ have been active participants in the community. The annual Easter children Egg Hunt that Sharon initiated 10 years ago, with a dozen kids hunting for eggs in the field at Alexander Gardens, has grown to more than 500 children in search of eggs at the Village Green in Cashiers.  It’s her way of returning her love to a community that has so enthusiastically embraced her.