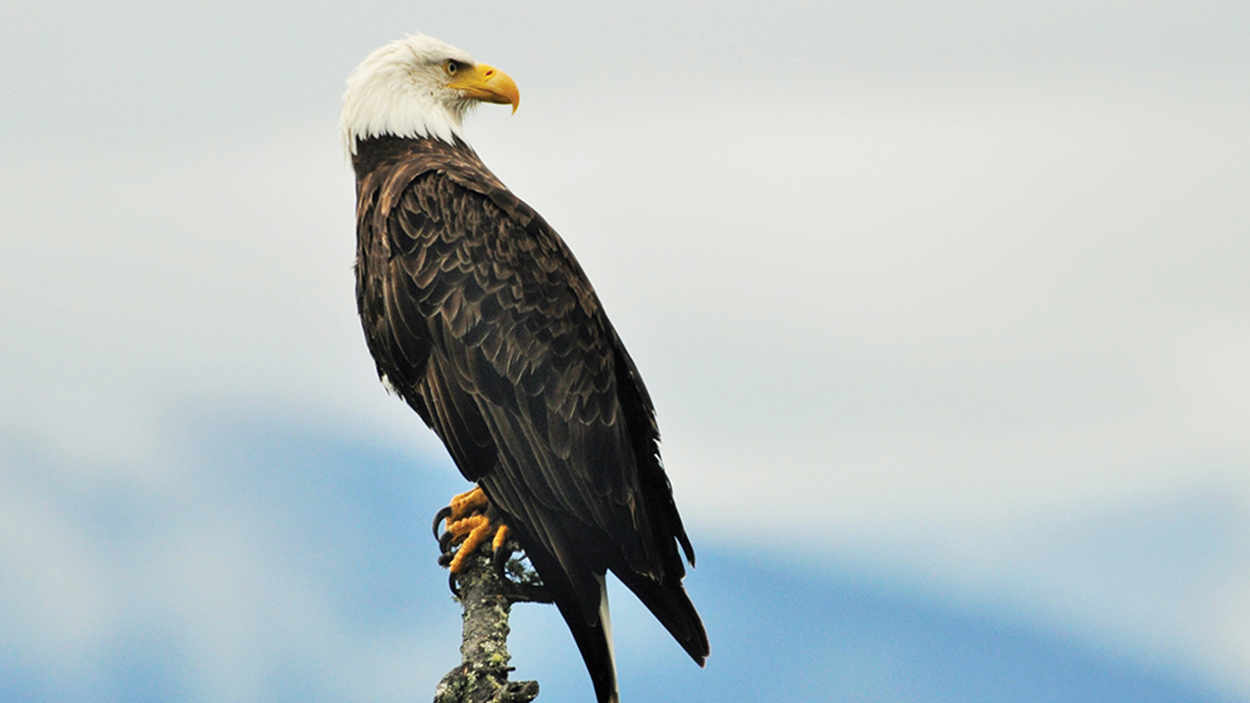 The noble Bald Eagle, who’s finally returned to the Plateau, is majestic even when it’s perched.

There’s something spectacular about this bird, our National Bird, and I am eager to tell you about it.

First, let’s get to know this iconic raptor. The Bald Eagle (Haliaeetus leucocephalus) is native to North America where it dwarfs all songbirds. Typically they weigh nine pounds. and have wingspans of up to 7.7 feet.

The female is larger than the male by 25 percent although the plumage is the same across genders. They have bright yellow beaks and legs, dark mottled body feathers, long white tail feathers and stunning white-feathered heads.

Bald Eagles occupy the highest reaches of the forest and sky. They soar on broad, flat wings, catching thermal convection currents that hold them aloft effortlessly. They dive at speeds upwards of 100 miles per hour. They perch and nest in the tallest trees in the forest.

Their nests are huge. Both male and female build the nest which they might reuse over the years, adding new branches and soft material each year. As a result, their nests, built at heights up to 180 feet off the ground, become massive, reaching weights of over one ton.

One to three eaglets occupy the nest for about 10 weeks before fledging. After fledging they linger around the natal nest for several weeks before launching independent lives in the forest. Maturity, breeding and their own nest come four or five years later. They are known to live 20 years in the wild. In captivity one lived to 50.

Now comes the spectacular part. Males court females with calls and flight displays. Courtship also involves chasing and acrobatic coupling not seen elsewhere in the avian world. The high flying male and female, at apex, lock talons, facing each other, and go into a spectacular tumbling free fall that ends moments later with the ground rapidly approaching and the pair breaking off into flight at the last second. How’s that for forming a pair bond!

The numbers of Bald Eagles in North America were in steep decline in the 20th Century until they were given protection from hunters. After DDT was implicated in egg shell failures among nesting birds and banned, eagles made rapid and full recoveries in some states. In 2007 they were removed from the official list of Endangered and Threatened Wildlife.

Today you can find Bald Eagles on the Plateau near large bodies of water and rivers. Imagine a large Bald, swooping down suddenly and catching a large fish in its able talons and just as suddenly flying away with a triumphant SCREEEEECH.