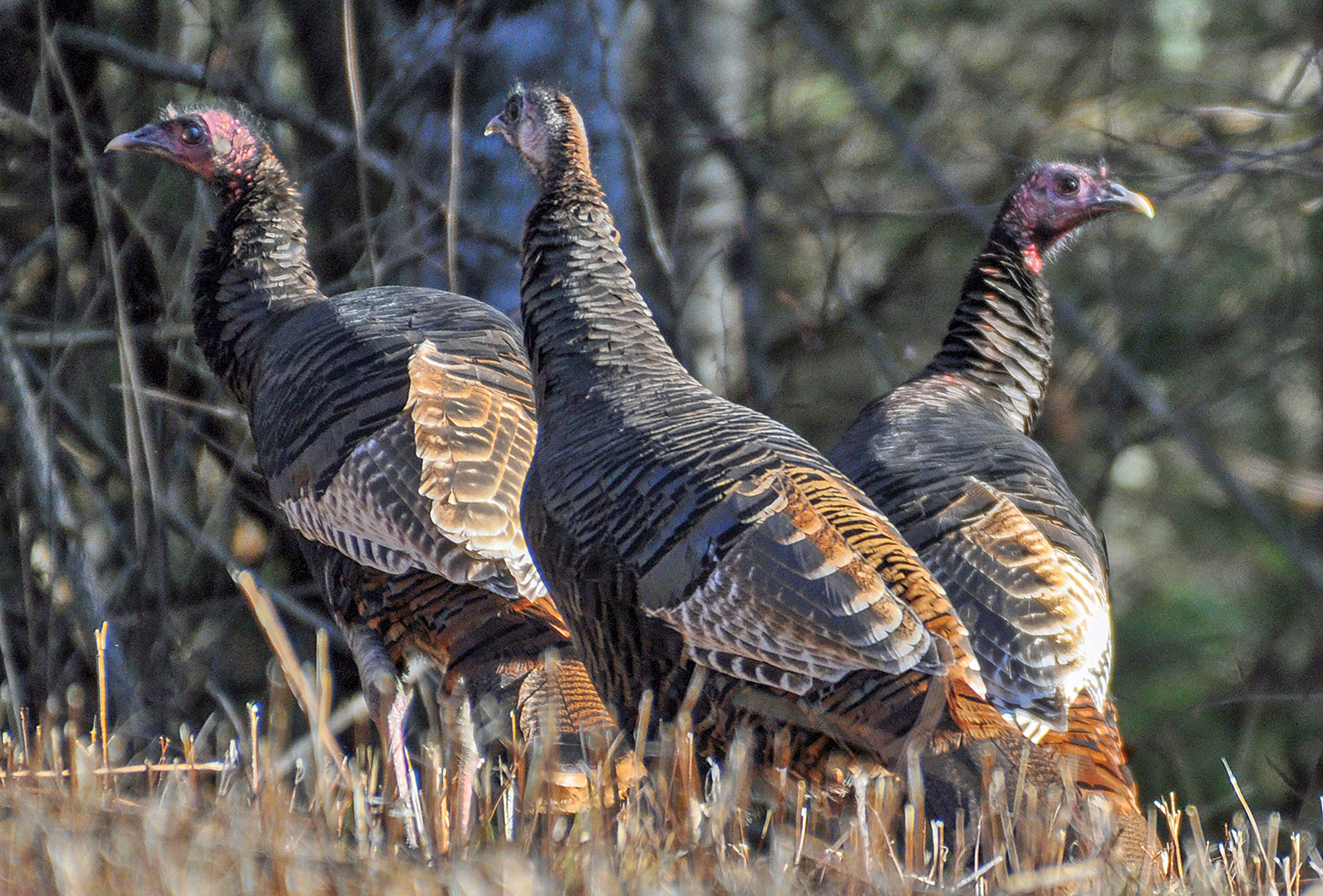 The Wild Turkey (Meleagris gallopavo) is a native of North America, abundant on the continent when Columbus arrived.

According to Lovett Williams, in 1492 the population of this indigenous bird covered a good deal of the eastern and southern land mass and numbered 40 million. By 1940, overhunting and habitat loss had reduced their presence to just 12 percent of their earlier range. Since then, good conservation and transplant efforts have reinstated the Wild Turkey and it now appears in all 48 contiguous states.

This hardy American is highly social and prodigiously vocal within its flock or “raft.” They produce at least 30 distinct calls, signals to others within earshot. The males gobble to call the hens, hence they are “gobblers.” There are also “whippoorwill calls” to warn an adversary, distinct “rattles” that signal a fight, and a sharp, loud note or “alarm putt” signaling an approaching predator. Other alarms include an “alarm pit-pit-pit” calling all heads up, a “singing alarm” signaling a high-flying bird of prey and “distress scream” when attacked. Hens emit “hatching yelps,” “hatching hoots,” and “assembly yelps” to hatchlings and young poults. There are a variety of other turkey whistles, cackles, clucks, coos and calls. Poults begin imprinting on their hen mothers’ calls before hatching.

Immature males are called Jakes. Gobblers or “Toms” court females and try to intimidate other males with a puffed-up display of feathers that is worthy of a float in the Macy’s Thanksgiving Day Parade. Gobblers and some hens sport beards, wattles, caruncles and a snood hanging over the beak. The male’s featherless head can change colors quickly from gray to red and blue signaling mood and sexual interest.

Turkeys forage along roads and in open fields and have home ranges of hundreds of acres depending on the availability of insects, grubs, nuts and other food. Nationally, their range has expanded north and much farther west. Adults molt gradually once a year in the warmth of the summer months. The Thanksgiving Day turkey that graces our tables each year is a domestic version of America’s Wild Turkey.

The Highlands Plateau Audubon Society, focused on enjoying and preserving birds and their habitats, is a Chapter of the National Audubon Society and a 501(c) (3) organization. For information on all our activities and membership, please visit highlandsaudubonsociety.org.