The American Robin brings song and color to a pandemic-dazed Highlands Cashiers Plateau in need of a burst of cheerfulness. 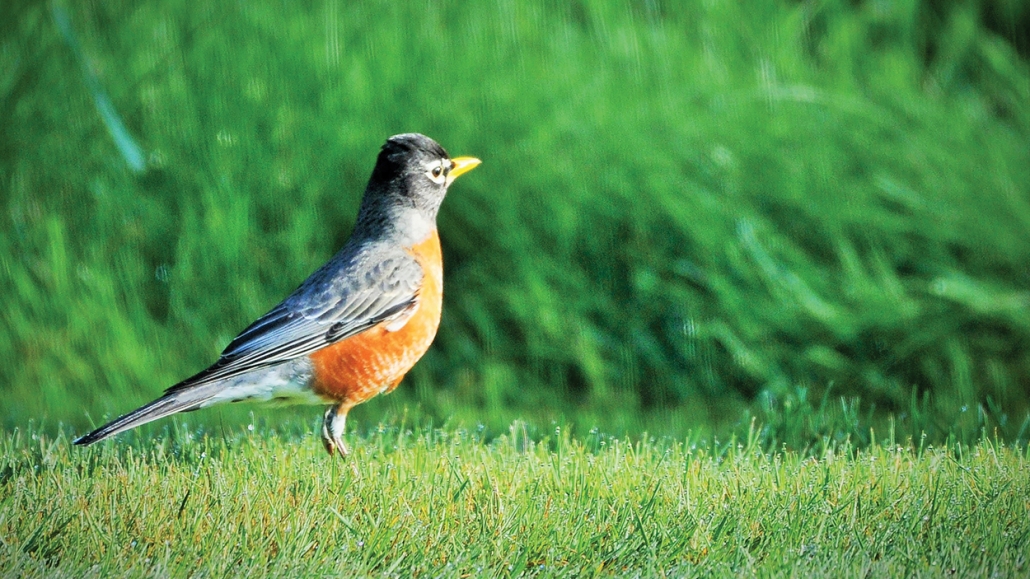 This bird is a sign of spring, the iconic image being its red breast blazing in the sun and its yellow beak tugging on a fat, juicy earthworm in the green grass.

One of the most abundant birds in North America, they are found in every state except Hawaii. Our American Robin (Turdus migratorius) is the state bird of Connecticut, Michigan and Wisconsin.

The robin, a member of the thrush family, has been celebrated in poem and song When the Red, Red Robin Comes Bob-Bob Bobbin’ Along, sung first by Bing Crosby, and made sacred in William Blake’s lines, “A robin’s red breast in a cage puts all heaven in a rage.”

These are large birds, 9-11 in. with a round protruding belly. Some features are outlined in white. Gender differences in plumage are not always distinguishable. Males have dark heads, a yellow beak and thrush streaks on the throat. Females are more muted but similarly attired.

Robins form winter flocks in the thousands and disperse in spring into small flocks and pair bonds. If food is abundant and conditions favorable, they do not migrate from their breeding grounds.

In the spring and summer they are active feeders, said to eat earthworms in the morning and fruit and berries in the afternoon. In the summer and fall when they eat fermented honeysuckle berries they can become intoxicated.

How can you recognize an intoxicated robin? It uncharacteristically falls off the branch.

The robin hops on the ground and becomes motionless with its head cocked listening for life sounds in the ground. It has a self-confident, even bold, presence in the yard or garden.

The female chooses the nest site: trees, gutters, eaves, most any elevated structure. They are not cavity dwellers and will not use nest boxes. Both parents raise their young and will have as many as three broods in one season. Nesting produces 3-5 eggs which incubate for 12-14 days. Robins are preyed upon by raptors, snakes and cats. Their average lifespan is two years; their entire population turns over every few years.

Their song is a melodic outpouring that Sibley describes as: “a series of low, whistled phrases with liquid quality typical of thrushes.”

Transliteration does not work well with this bird’s song. Emily Dickinson likened it unto a “Piano in the woods.”

Did I mention that the American Robin once appeared on the Canadian $2 note?

The Highlands Plateau Audubon Society, focused on enjoying and preserving birds and their habitats, is a Chapter of the National Audubon Society and a 501(c) (3) organization. For information on all our activities and membership, please visit highlandsaudubonsociety.org.