They dive, they dabble and they decorate our lakes and ponds – Ring-Necked Ducks are leaving us for the season, but not without putting on an endlessly entertaining show. 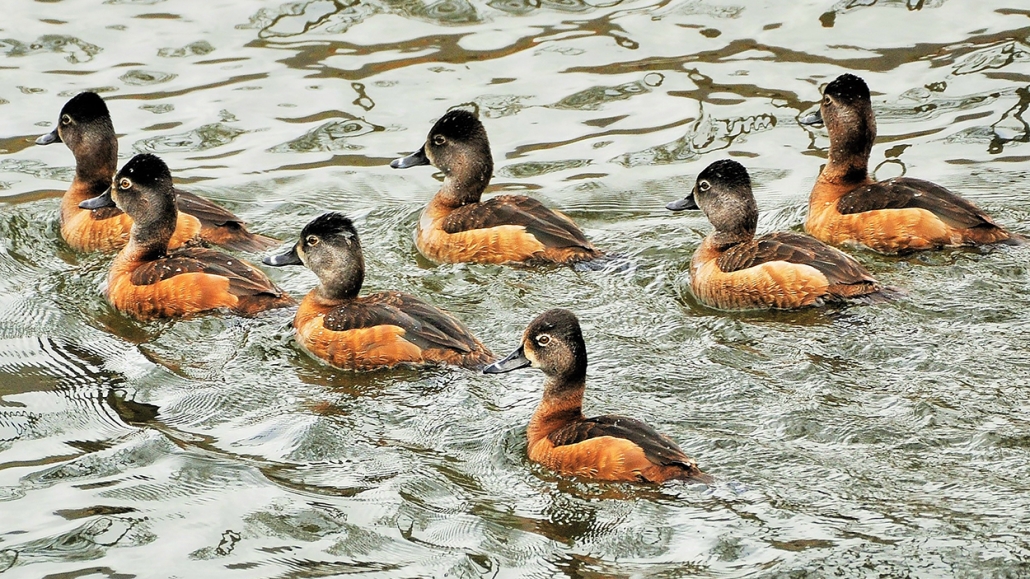 A “flotilla” of female Ring-necked ducks by William McReynolds

The ring on the Ringed-Neck Duck (Aythya collaris) is almost never visible, so don’t strain to find it.

The male is formally attired in black and white, like an avian orca, while  females are clad in coffee browns with yellow/orange wings and white eye-shadow around their piercing eyes. These hardy ducks are much smaller than Mallards and, unlike most diving ducks, can take flight leaping directly off water without a take-off run.

These are migratory birds that winter here on the Highlands-Cashiers Plateau and find summer breeding grounds in eastern Canada and northern New England. They form small flocks on our wooded lakes and ponds as well as freshwater marshes, bogs, estuaries and slow-moving rivers. A flotilla of Ring-Necks might join other small ducks to form a mixed flock.

Ring-Necks are diving ducks that forage underwater for aquatic plants, roots of pondweeds, sedges, smartweeds, grasses, algae and whatever the habitat provides. Aquatic insects and mollusks are fair game. They sometimes upend themselves for “dabbling” in shallow water such as flooded fields. Young ducklings feed on insects.

Courting and pairing starts during the winter months. The eager male’s displays involve head and neck movements, the head held back and then thrust forward or, in water, head feathers are held erect with rapid canoodling. The nest, a shallow bowl of grasses and weeds lined with down, is built on a hillock, clump of dry grasses or mat of floating vegetation, all near open water.

As few as six and as many as 14 gray-brown-buff eggs are incubated by the female for 25-29 days. She leads the ducklings to water within 24 hours of hatching and teaches them to find safety hidden in their watery habitat. Unlike most ducks, the female Ring-neck stays with her young until they can fly, around 50 days after hatching. Then comes the original empty nest syndrome.

Happy May birding from the Highlands Plateau Audubon Society. By May, the Ring-necked Ducks have probably taken their leave for northern climes, making room for returning hummingbirds and warblers. Welcome all!

The mission of the Highlands Plateau Audubon Society is to provide opportunities to enjoy and learn about birds and other wildlife and to promote conservation and restoration of the habitats that support them. HPAS is a 501(c)(3) organization, a Chapter of the National Audubon Society.

Visit highlandsaudubonsociety.org for information on membership and all activities.