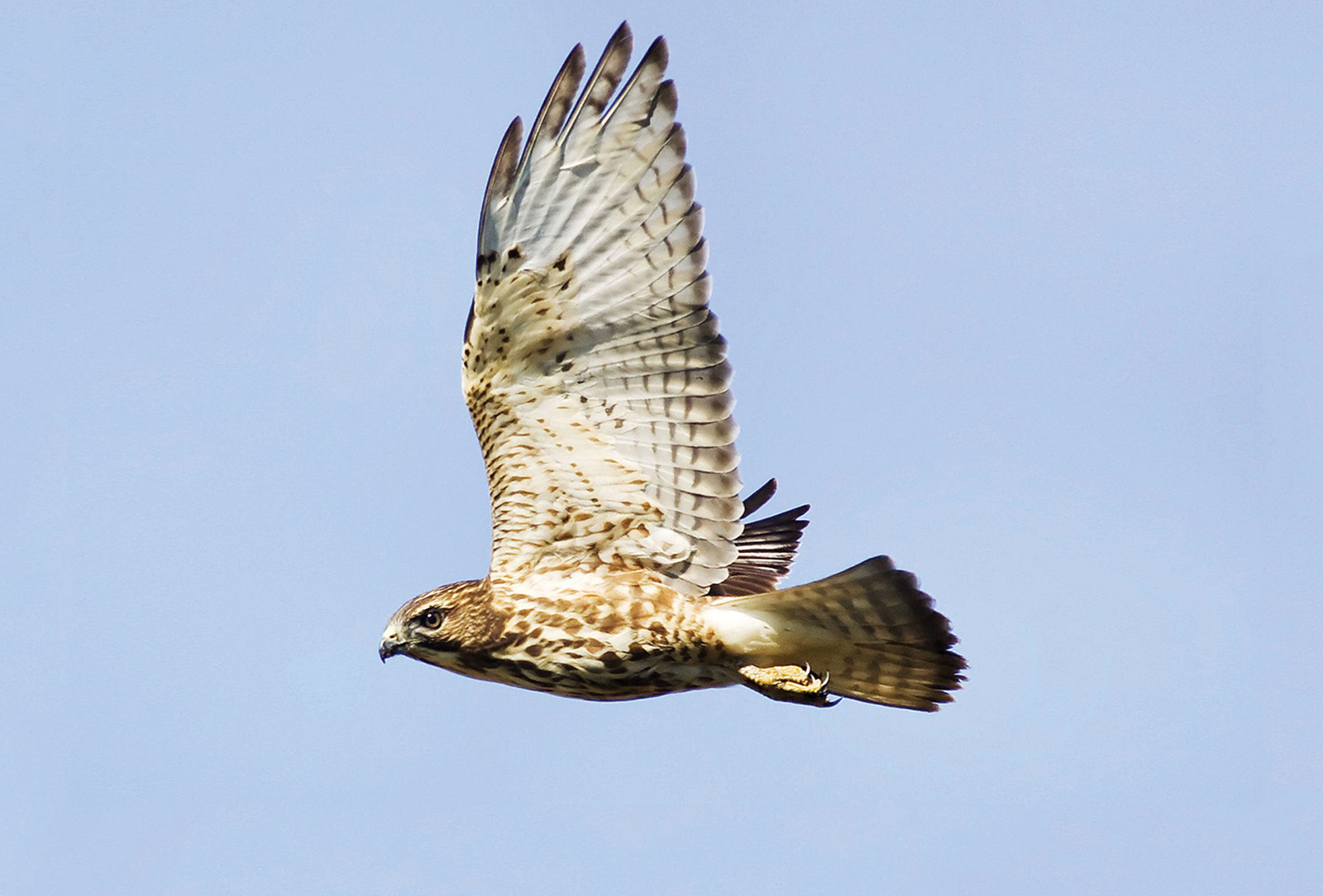 Broad-wing Hawks (Buteo platypterus) are smallish hawks, recognizable while soaring by their full wing span and tail bands. Hawks generally are highly intelligent, defining and measuring intelligence as innovativeness in feeding habits. Their visual acuity, sharpness of vision, is astounding owing to the density of photoreceptors in their retina being five times greater than the density of the
human retina.

Broad-wings are skillful hunters, preying on lizards and chipmunks and voles and the like but changing their diet as seasons and available food change. They hunt beneath the forest canopy from a high perch, diving down upon and seizing prey with their deadly talons. They skin some prey like frogs and snakes but consume small mammals whole.

Some hawks pair bond for life. They mate famously in freefall from high altitudes. Both male and female build the nest. The male subsequently brings food to the brooding female or takes his turn on the nest and then brings food to the hungry nestlings. The female is larger than the male.

The fall migration of Broad-wings and other hawks returning to Central and South America reaches its peak in September. At this time large “kettles” form containing hundreds and even thousands of migrating birds, taking advantage of favorable winds and riding thermals in huge spiral cauldrons, reaching its highest point before the individual birds peel off to soar great distances to the south while searching for the next updraft. On September days with clear skies and favorable wind, thousands of Broad-wings can be sighted soaring through the gorges and mountains of the Great Smoky and Appalachian ranges.

A local opportunity to sight migrating hawks is being led by the Highlands Plateau Audubon Society this month. The tentative day for this outing to Whiteside Mountain is Monday, September 18. This trip requires some strenuous hiking up the mountain and down again along steep trails. The date might change according to wind and weather. To join an e-mail notification list, call Brock Hutchins at (828) 787-1387 or (404) 295-0663. All are welcome; binoculars will be provided.

The mission of the Highlands Plateau Audubon Society is to provide opportunities to enjoy and learn about birds and other wildlife and to promote conservation and restoration of the habitats that support them. HPAS is a 501 (c) (3) organization, a Chapter of the National Audubon
Society. Visit highlandsaudubonsociety.org for information on membership and all activities.