In 1916, a season of floods and a hurricane spelled disaster for the getaway destination of Lake Toxaway. 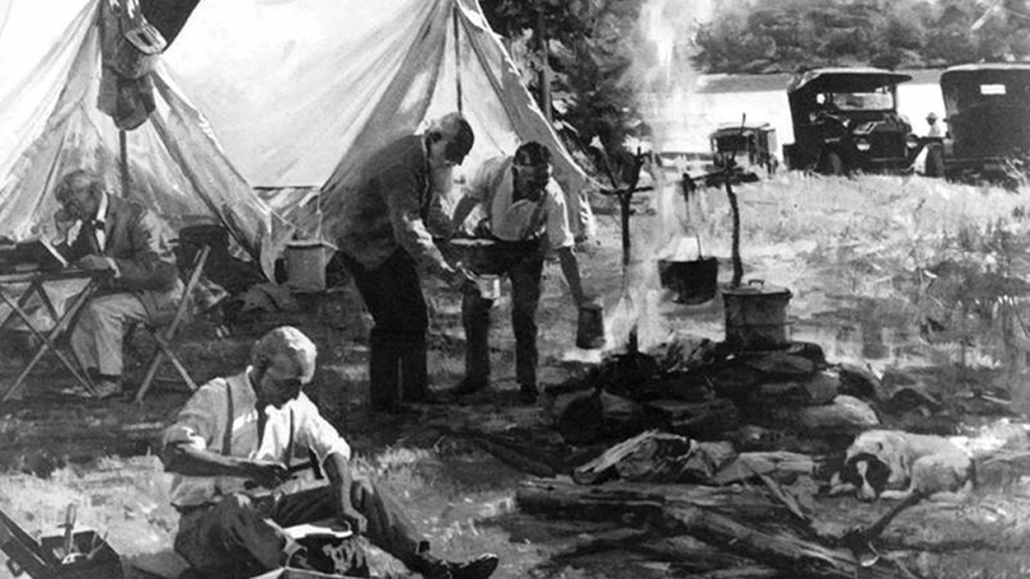 Though they imagined they were roughing it, Thomas Edison, Henry Ford, Harvey Firestone and Mr. Unknown Figure were 100 yards from the comforts of the opulent Toxaway Inn.

In last month’s issue of The Laurel, I laid out the mystery of a string of elderly former Toxaway residents dying in remote parts of Oregon in the 1980s and 90s and ending up back in the mountains for burial.

I noted that Toxaway in the early 20th century had all the makings of a thriving, growing community. That was predicated upon the building of the opulent Toxaway Inn and the construction of a railroad from Brevard to Toxaway Station. The railroad opened this corner of western Transylvania to exploitation of its mineral resources and its vast stands of the magnificent American Chestnut.

The inn brought America’s gentry to an untrammeled wilderness where they could enjoy all the amenities and comforts of modern 20th century life. It was spa living before people knew what that was.

It also brought a small army of workers needed to keep the entire enterprise going, and the railroad brought battalions of lumberjacks to harvest the deep forests that carpeted the surrounding mountains.

But a pair of catastrophes decimated this tiny community and left residents impoverished, some scattered to the far western forests of Oregon and Washington.

In July of 1916, heavy rains settled onto this corner of the Southern Appalchians. The soil became saturated and mudslides were frequent.

Piling on, in August a hurricane came ashore in Mississippi and turned northeast, arriving in Western North Carolina on August 13. That’s when the earthen dam holding back Lake Toxaway’s swollen waters gave way.

When you travel on US 64 over Toxaway Falls, you can see a vast slope of bare rock that’s nearly 100 yards wide. That stretch was carved by the escaping torrent of Lake Toxaway’s five billion gallons of water draining in the span of 18 minutes.

If you were to follow the course of Toxaway River from that devastated landscape, you’d find an enormous 60-foot-long boulder carried down the flood. About a half mile further down Toxaway River there’s a 60-foot long boulder weighing nearly 900 tons that was moved there by the flood.

Instead of a picture-postcard vision of beauty and tranquility, Lake Toxaway was transformed into 540 acres of drying mud, interspersed with shallow pools clogged with dying fish.

That ended the idea of Toxaway serving as a glamorous getaway and in 1947 the Toxaway Inn was sold and dismantled.

Well, I’ve used up my word count. Join me next month when I finally solve the Mystery of Uncle Mac.