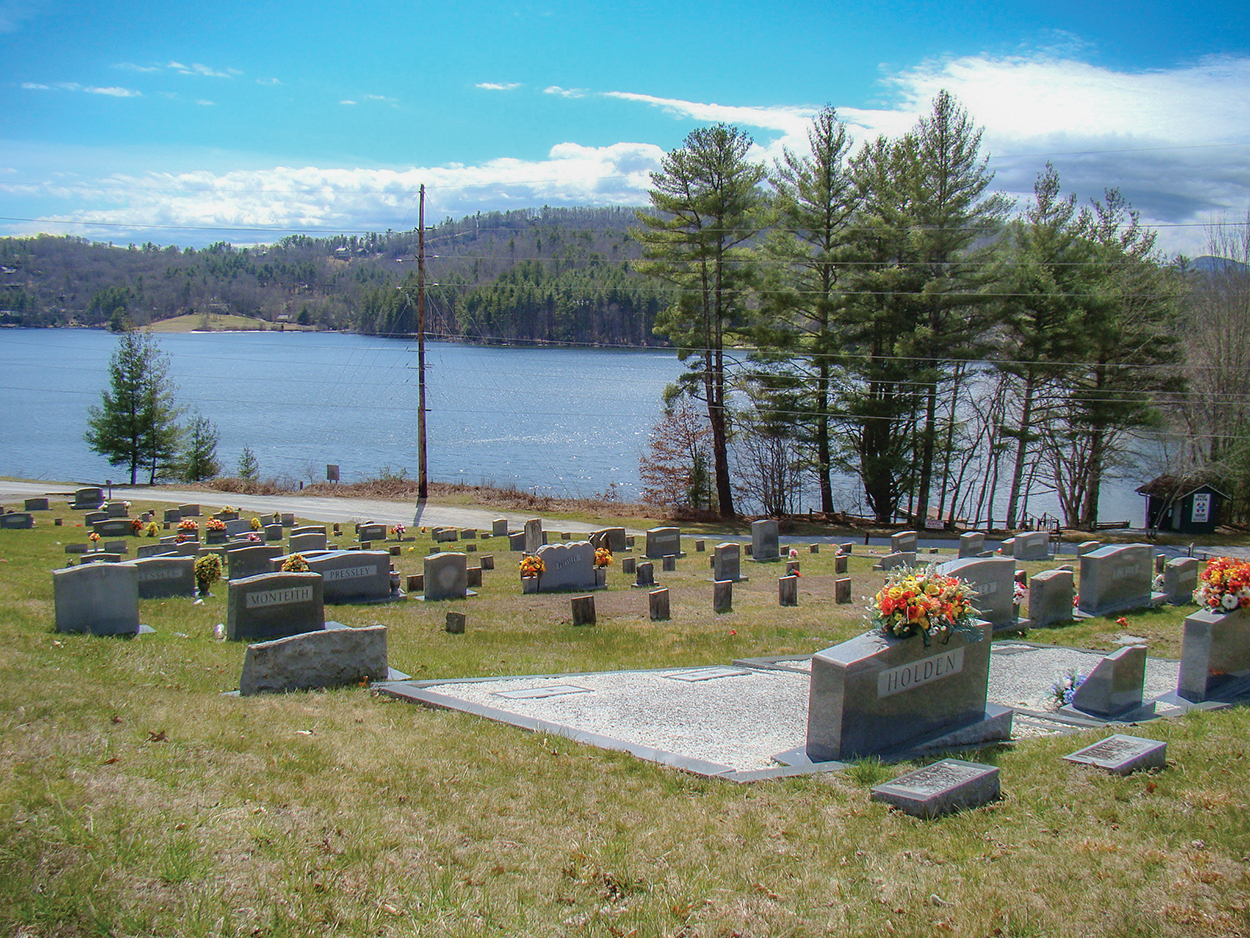 Rumors and speculation still swirl about a mystery beneath the deep waters of Lake Glenville.

A  frequent question asked of me is, “What happened to the graves in the cemeteries of the old village of Glenville once the dam was built and the old village was flooded?

I’ll attempt to answer that question.

An announcement appeared in the Jackson County Journal newspaper in October of 1940 that the Nantahala Power & Light Co. was going to be digging up all the graves in the cemeteries in the former town of Glenville, and moving them to a new cemetery on the mountain across from the just built Hamburg Baptist Church.  The church was being built with funds provided by the power company, to replace the original church demolished by the power company.

The announcement read “…that the land is required for use as a reservoir for the water impounded by a dam…., and that is therefore necessary to remove the graves from said cemeteries…”

Persons having spouses or next of kin were formally notified by this announcement that each casket would be opened, and that “the dead bodies or any part buried therein or anything interred therein shall be removed to the new cemetery.”  The living descendants and relatives were instructed to meet with an agent of the company, a man named Mr. Raper, if they wanted to be there at the time of the opening of the casket and the move to the new cemetery.

Mary Emma Burgess Monteith had just been buried in the Monteith Cemetery in April that year.  Her husband, Thomas Samuel Monteith, who had died from blood poisoning from an abscessed tooth in 1917, was buried in the old family cemetery, as were three of their children they had outlived.  Their surviving children, James Candler Monteith, John Wesley Monteith, Thomas Clingman Monteith, Otelia Belle Fowler and Elsie Hawkins, must have met with the agent since their deceased family members are buried side by side in the new cemetery.

The village had a total of 113 years of being a business and farming settlement along the highest waters of the west fork of the Tuckasegee River, before the need to generate electricity became a priority.  The village was first named Hamburg.  Its name changed to Glenville in 1891 during the time of its town incorporation attempt.

According to my tabulations taken from other transcribers’ listings, there were 420 caskets moved that winter from the cemeteries in the old town of Glenville to the new cemetery we know as the Hamburg Cemetery. Of those moved, 31 are now unmarked as to their identity, and 389 still have stone markers citing their names and dates.  Of those 389 gravesites, 106 still have stones engraved with the words “Removal,” which stones the power company had laid in an attempt to make a record of those removed, but many of these stones are apparently missing.

The earliest years inscribed on a headstone in the cemetery mark the remains of William Henry Moss who died in 1861, and Ruth Peek Moss, wife of Milton Moss, who died in 1863. Some of the unmarked graves could be even earlier.The graves of the earliest settlers that are marked are Alexander Wilson, Alfred Wilson, and Thompson Wilson, sons of the earliest Hamburg settlers, William and Catherine Wilson.  The graves which are marked with just the surnames, Teague and Ledford, are also those of pioneer families.