The Rotary Club of Highlands won’t let something like a global pandemic dim the glory of its 75 years of service to its community and the world. 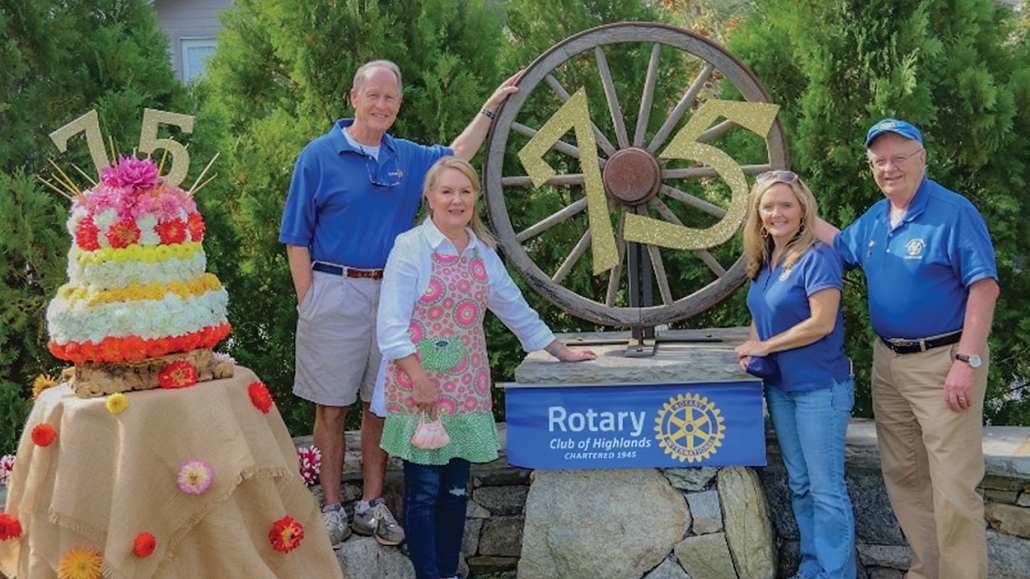 A  75-year anniversary mark is referred to as “diamond jubilee,” a term coined by Queen Victoria of England. And 2020 is Highlands Rotary Club’s year to celebrate its 75th  anniversary Diamond Jubilee. Although the club was not able to go forward with formal event celebration plans, it did call attention to the milestone during the annual Dazzling Dahlia Festival in September.

Dave O’Harra, public image chairman, said, “I’ve been just so impressed with how the Rotary Club reaches out in so many different ways: food pantry, Highlands School, underprivileged, and much more. Service Above Self has always been the motto, and you see that demonstrated.”

Even with so many Rotary events compromised and/or cancelled because of COVID-19, Highlands Rotary Club has still raised tens of thousands of dollars and continues to impact the community in positive ways, informed President Zach Claxton. “We started Zoom meetings this summer and in October we were able to begin welcoming 20 members at meetings at the Highlands Rec Center, with other members continuing to Zoom. We will continue to work for the community no matter what.”

“And our membership of 95 maintains strong ties with our Western North Carolina District and with our 1.2 million fellow International Rotarians,” conveyed O’Harra. “For example, one goal has been to eradicate polio worldwide and we are working together to eradicate a pocket that still exists near the Afghanistan/Pakistan border. Plus, there is an active effort to donate money to help cure Alzheimer’s disease. There’s just so much Rotary has done and will continue to do for many more years.”