Our 20th Anniversary is testament to the undeniable power of dreams and our unshakable faith in the people of the Highlands-Cashiers Plateau. 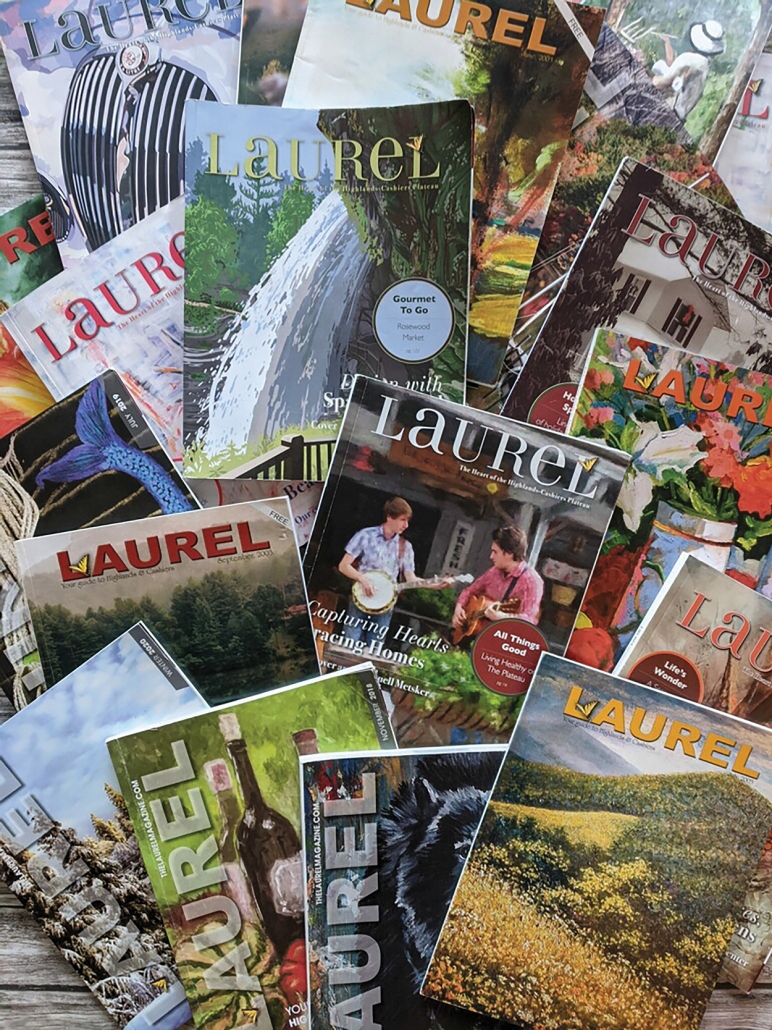 As we’re finally, hopefully, coming out of a global pandemic, this issue of The Laurel is bursting with excitement.

We’re reporting about community events to be held, celebrations and concerts that’ll breathe life back into our exhausted spirits. There are profiles of the personalities that animate the Plateau, and explorations of the natural heritage that we all cherish.

It’s all summed up by these kind words from Richard Delany, the president and managing director of Old Edwards Hospitality Group:

“The Laurel’s tagline is ‘The Heart of the Highlands-Cashiers Plateau,’ and from what I’ve experienced that rings true – of the magazine and the people behind it. The Laurel is not just a source of information and entertainment, but they go out of their way to contribute to the community through charitable support, board and committee service, and many other ways besides just publishing a magazine. They live in the community, they care about the community, and it shows.”

I’m using Richard’s statement here because it illuminates the deep, uncontainable joy that my eternal best-bud and co-publisher Marjorie Christiansen and I are feeling for this, our beloved magazine’s 20th Anniversary.

You see, 20 years ago when we conceived the notion of a glossy magazine that’d focus on the people and the art and the businesses that animate the communities that comprise the Plateau, we were casting our line into waters that were as unpredictable and punishing as the straits of Bust Your Butt Falls.

Since we both worked for local newspapers, we understood that so much of life here in this tiny corner of the Southern Appalachians was just not being covered.

The creations of artists who found unquenchable inspiration here, well, they simply couldn’t find their full expression on four-color newsprint.

No one was taking the time to introduce newcomers (and, for that matter, some natives) to the trails and streams and wild places that are a part of our heritage.  Who’d make note of the astonishing meals that were served up on a daily basis in our restaurants – the sorts of dishes that you’d still recall years later as you were drifting off to sleep?

Who’d illuminate the treasures to be found in our local shops and galleries and boutiques – the hand-selected treasures that have earned Highlands and Cashiers top-tier status as shopping destinations?

All of these questions figured into our calculations.

Yes, but here’s the rub: Both Highlands and Cashiers had year-round populations of fewer than 1,000, and they were only fully alive for eight months out of the year.

What sort of readership and advertising base could you cultivate with that sort of demographic?

That was the question that potential supporters asked us again and again. (And even our own faithful editor Luke Osteen, who’s been with us from the start, thought it was all “kind of a nutty idea.”)

Well, we couldn’t answer them with any quantifiable data or balance sheet projections – for the simple reason that no one had tried something like The Laurel before.

We just knew, based on nothing more than intuition and our belief in one another, that this rare bird could fly.

And we never lost our faith in the goodness, the profound decency, of the people who live here. We knew you’d stick with us through those shaky first few issues, and we hoped that you’d open up your lives to us and allow us to tell your tales in our pages.

And amongst all those naysayers, there were a few people who believed in us from the start.

You wouldn’t be reading these words were it not for the tireless tutelage of the late and deeply-missed Ralph DeVille of Stone Lantern, and the aesthetic instincts of his daughter Susie; and the generosity of realtor Terry Potts, who committed to advertising in The Laurel solely based upon his faith in this notion; and Nancy Aaron of Southern Hands (and now the executive director of the Highlands-Cashiers Chamber Music Festival), who asked why she should put her trust and her precious advertising dollars in a magazine owned by two novices.

Marjorie’s answer to Nancy was a clarifying moment for us and an
assertion that’s been borne out by these 20 years.

She handed Nancy her business card embossed with The Laurel Magazine and her Highlands address and Highlands phone number.

“Nancy, this is me,” she said, “and this is how you know – we’re your neighbors who’ll always be two minutes away.”

Nowadays, this magazine is our business card. I hope it assures you that your time between these covers is time spent with neighbors who are only two minutes away, neighbors delighted to tell you the story of the Plateau.