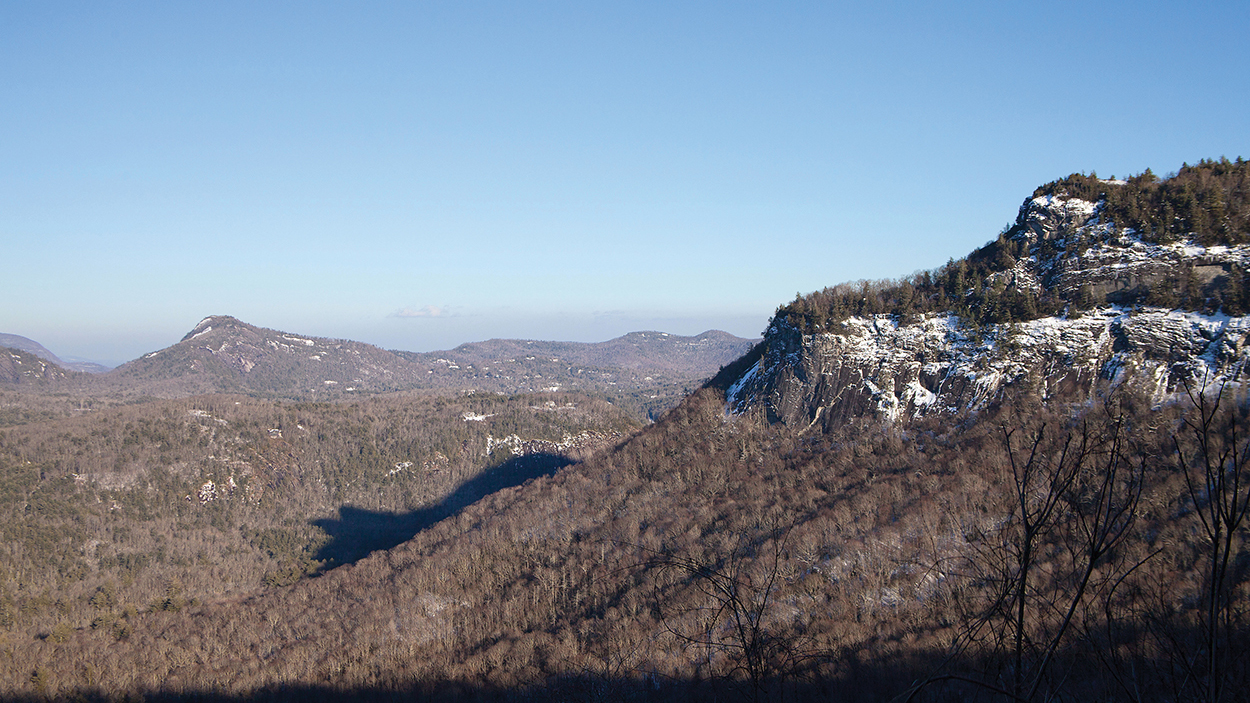 During the winter to early-spring months, the Cashiers-Highlands high-elevation Plateau comes alive during a “secret season.”

During the winter to early-spring months, the Cashiers-Highlands high-elevation Plateau comes alive during a “Secret Season.”

A lot of these experiences get a lot of play, both here on the Plateau and far beyond.

For instance, tubing and skiing at Scaly Mountain and in Sapphire draw in plenty of visitors looking for an authentic Winter in the Mountains experience. And the ice skating rink at Highlands’ Kelsey-Hutchinson Founders Park has already won a passionate following.

But one spectacular winter feature remains a mystery to both visitors and locals.

More commonly known for its fall appearance, the Shadow of the Bear comes out of hibernation twice a year.  From mid-February to early March, it makes an appearance for just 30 minutes on sunny days at 5:30 P.M. at the Rhodes Overlook on US 65 between Cashiers and Highlands.

One advantage to seeking out the view at this time of year is that it doesn’t attract the number of viewers that its fall appearance engenders. Onlookers will enjoy an unobstructed view as a small dark shadow at the bottom of the Cashiers Valley grows until it finally evolves into the awe-inspiring bear.

Be sure to bring your camera to capture this spectacular view as the sun sets behind iconic Whiteside Mountain.

The mountain, with an elevation of 4,930 feet, boasts sheer rock cliffs that are among the highest in the eastern United States. It provides a splendid setting for viewing leaves throughout autumn, especially during the emergence of the Shadow of the Bear.

Be careful and watch out for busy highway traffic when parking and leaving the site. Rhodes Big View overlook is located along Highway 64, approximately four miles from Cashiers, heading towards Highlands. With vistas that range from Cold Mountain on the Parkway to Devil’s Courthouse on the shoulder of Whiteside, this breathtaking sight marks your entrance to Jackson County in a most memorable way.

Parking is available, but of course, use caution crossing the road – there are a lot of rubberneckers behind the wheel at this inspiring vista.

And if you can only visit Rhodes Big View after the middle of March, you can still be dazzled by the appearance of the Shadow. But due to the tilting of the earth’s axis, that ursine shadow morphs into other representatives of the Animal Kingdom. Use your imagination and you’ll witness the Shadow of the Anteater, or the Emergence of the Pregnant Beaver.

Casting your gaze beyond the Bear Shadow, the Plateau’s mountainous winter topography reveals itself amid majestic trees along scenic corridors.  The Panthertown Valley Trail features winter scenes of frozen waterfalls, scenic trails and panoramic views in what is known as the “Yosemite of the East.”  Granite rock faces along the local byways are transformed by sparkling icicles.  Even the icy running waters of the Tuckasegee River and the Cullasaja offer some of the best fishing during colder months.

To learn more about the late winter possibilities to be found on the Highlands-Cashiers Plateau, visit cashiersareachamber.com and highlandschamber.org.