Singer-Songwriter Erick Baker’s exuberant music marks the resumption of the Orchard Sessions at The Farm at Old Edwards, Thursday, June 17. 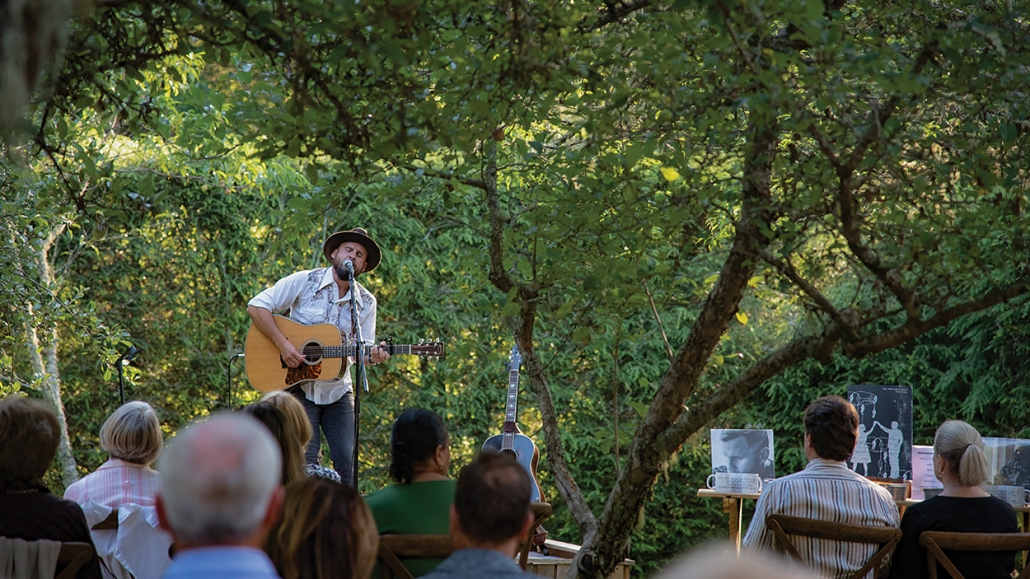 It’s well known that the Coronavirus has hit the music scene hard.

The announcement of the reopening of the Orchard Sessions at The Farm at Old Edwards and that music concerts will no longer be quarantined on the Plateau is reason to celebrate.

After the past year’s enforced inactivity, the return of the music sessions and the chance to embrace nature, listen to music and simply being together is eagerly awaited. Now in its fifth season, the resumption of these exceptional gatherings and its gifted artists will officially launch on Thursday, June 17, with a show by Knoxville’s Erick Baker.

In fact, as he says “My performing career began in the smoky corners of Knoxville, Tennessee’s, restaurants and bars singing cover songs for distracted drunks and underage college students. I hadn’t seriously considered pursuing a career in music until May 2007 after an unexpected opportunity to open for John Legend at Knoxville’s Tennessee Theatre.”

That night changed Baker forever. Since then, he’s shared a tour bus with Rock ‘n Roll Hall of Famers, performed in front of crowds of over 20,000 people and played for uniformed men and women in stations around the world.

He’s released seven albums that reflect his genre-bending approach and the intricately crafted, emotive Americana music he writes and performs. Mountain Xpress describes him as having a “raw and powerful” voice and an “ability to whip an early crowd into a respectable frenzy.”

But recording and performing are not his only projects.

Two years ago, Baker made the decision to bring his music career to a halt to focus on being with his family. Out of this came the opportunity to host the PBS television series Tennessee Uncharted.

And soon to be released is his inspiring children’s book Willie The Weed, a story that, “Celebrates our differences, encourages optimism, and reminds us that #weallbelong .”

Shows begin each Thursday evening at 6:00 PM and finish at 8:00 PM – perhaps just in time to stargaze at the night sky. The cover charge is $15 for hotel guests and members with early online tickets available. And there is a $25 cover charge for the public, with online ticket sales opening two weeks in advance, if available. Every ticket includes complimentary light bites and a cash bar. Limited seating available and taking a seat in the grass is certainly welcome. The sessions will move indoors to the new Orchard House in the event of rain. For updates and more information, visit: OldEdwardsHospitality.com/OrchardSessions. Please note that dates are subject to change.