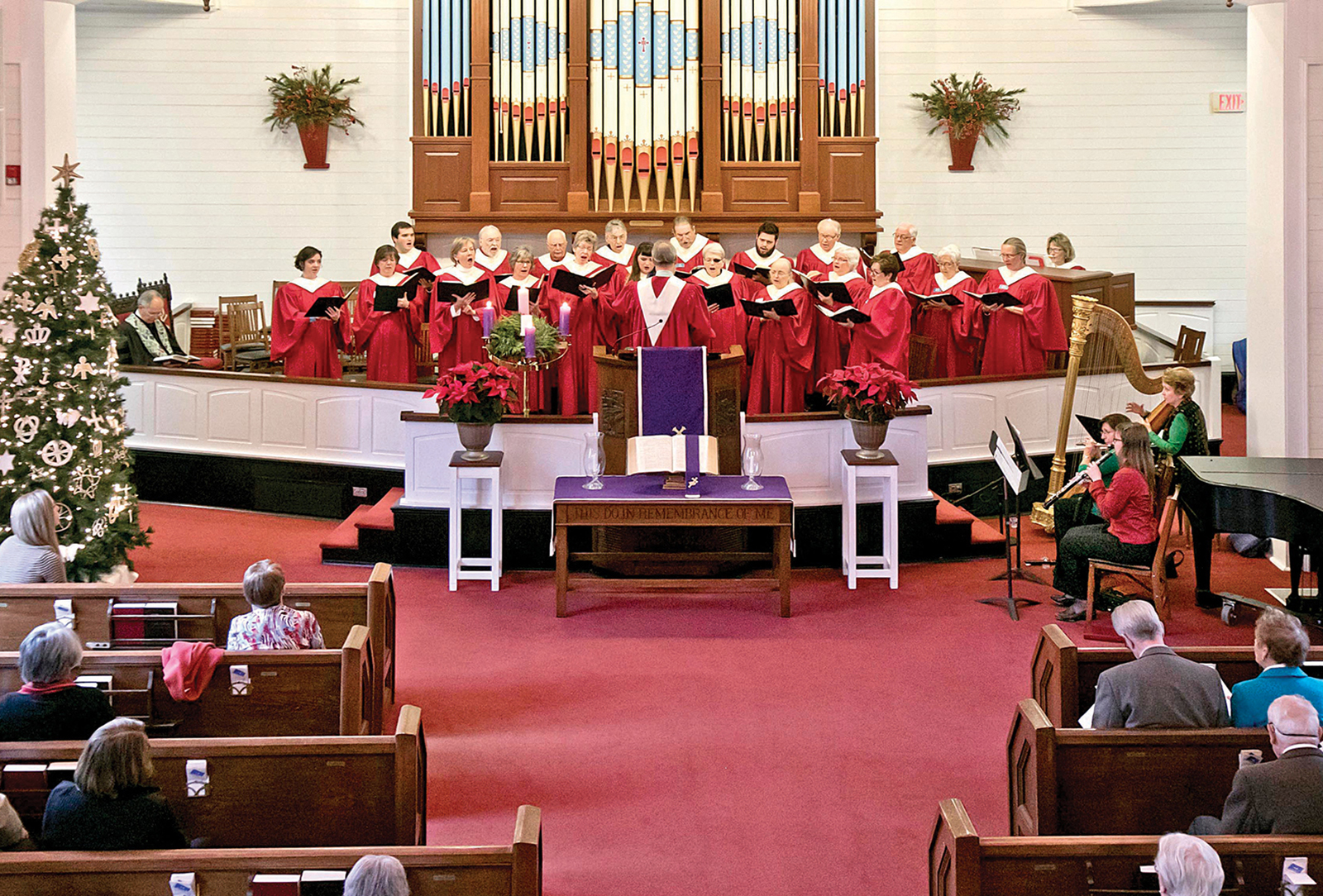 Kick off the Christmas season by joining your friends at Highlands First Presbyterian Church for the annual Christmas Carol Sing led by baritone Stell Huie, with Angie Jenkins at the piano.

It will take place Saturday, December 2, at 1:00 P.M.  It’ll be reminiscent of your childhood as you sing all the old favorite carols.

Later, at 4:00 P.M., the Asheville Symphony Chamber Chorus directed by Dr. Michael Lancaster will perform at the Presbyterian Church.   The chorus’ five-part program will include familiar Christmas classics.   The first portion of the program will include four renditions of “Ave Maria” including the “Gregorian Chant,” a composition by Jacob Handl from 1581, the 19th century setting by Anton Bruckner and finally, a composition from 1980 by Javier Busto.

Stephen Paulus’ composition “Three Nativity Carols,” written in 1998 and accompanied by oboe and harp, comprises the second part of the program.   Part III will include Christmas Spirituals including “Mary had a Baby,” “Rise up, Shepherd” and “Glory, Glory, Glory to the Newborn King.”  Part IV of the program will include arrangements of classic Christmas carols by contemporary composers for chorus, oboe and harp.  “He is Born, the Divine Christ Child” is a French Carol by Donna Hartmann Schultz.  Stephen Paulus’s “How Far is it to Bethlehem?” and “O Little Town of Bethlehem” complete this section.  Completing the program in Part V will be a Canadian Carol entitled “Huron Carol” by Dale Warland and John Rutter’s rendition of “The Holly and the Ivy.”

During the Sunday worship service on December 10 at 11:00 A.M. Dr. Lancaster will lead the Chancel Choir in the presentation of the ever-popular “Lessons and Carols.”  With accompaniment from oboe, harp, flute and organ, the program will include readings from Genesis, the prophetic books, and the Gospels with Christmas carols and choir music intertwined.

Spend Christmas Eve at Highlands First Presbyterian Church from 4:30 to 5:00 P.M. as well-known harpist and Highlands resident Valerie Von Pechy Whitcup plays some of your holiday favorites, followed by a traditional Christmas Eve worship service.  The church is located at 471 Main Street.  For more information, call the church
at (828) 526-3175.