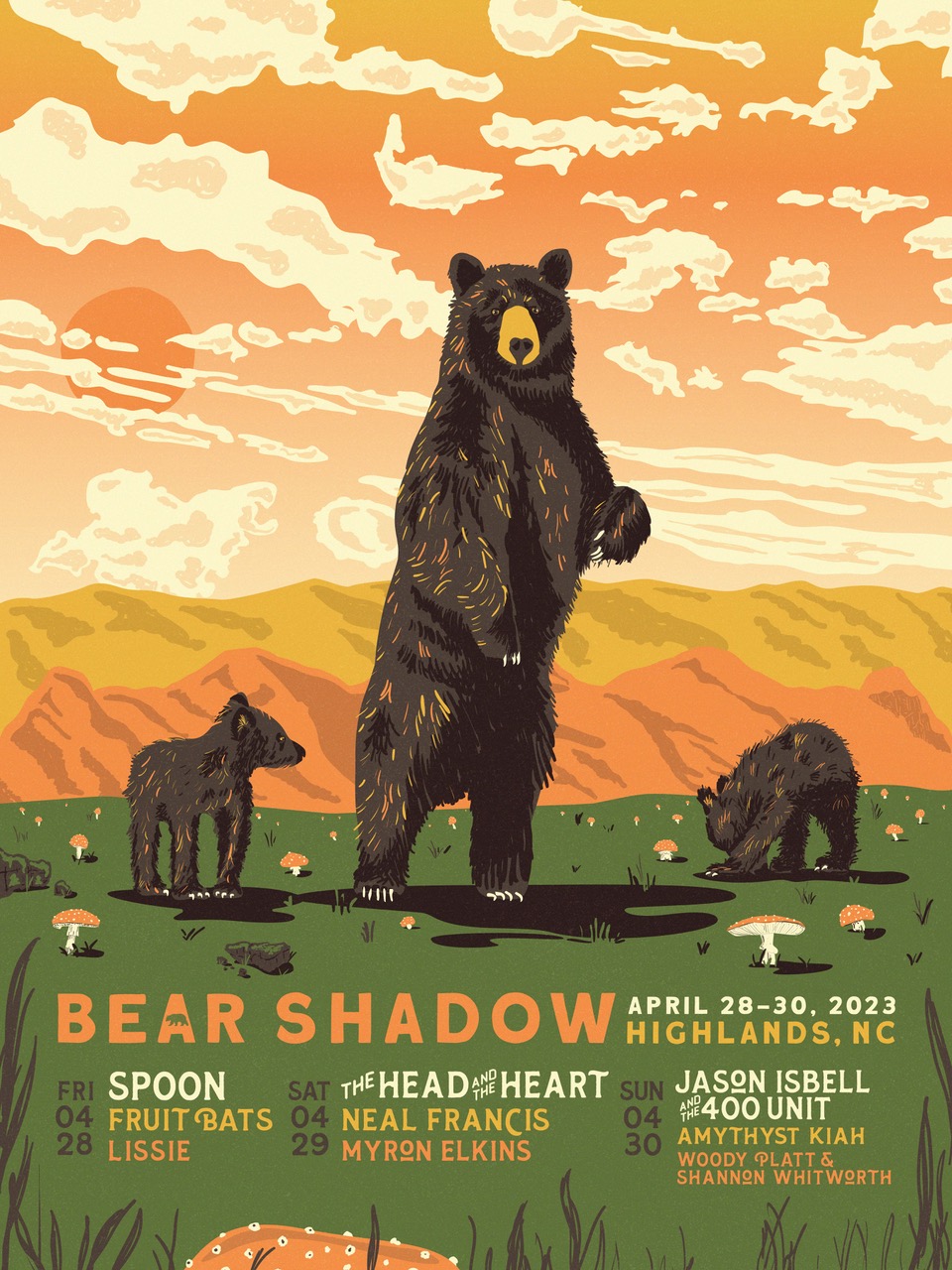 HIGHLANDS, N.C. — The lineup for the 3rd annual Bear Shadow spring music festival is jam-packed with today’s hottest stars in the Americana music scene, according to an announcement from Highlands Festivals, Inc. today. The music festival, set to be held April 28­–30, 2023 near Highlands, North Carolina, will feature headlining performances by Spoon, The Head & The Heart and Jason Isbell and The 400 Unit. Tickets go on sale Nov. 16.

HIGHLANDS, N.C. — The lineup for the 3rd annual Bear Shadow spring music festival is jam-packed with today’s hottest stars in the Americana music scene, according to an announcement from Highlands Festivals, Inc. today. The music festival, set to be held April 28­–30, 2023 near Highlands, North Carolina, will feature headlining performances by Spoon, The Head & The Heart and Jason Isbell and The 400 Unit. Tickets go on sale Nov. 16.

The Bear Shadow music main stage, called “Base Camp,” will be held again at Winfield Farm in Scaly Mountain, just a short drive from downtown Highlands.

“When we set out to produce one of the hottest tickets on the music festival scene, we knew the Highlands area would deliver appeal, and that is evident in our third annual Bear Shadow festival lineup,” said Casey Reid, partner of Eleven Events and Festival Director. “We are beyond thrilled to bring some of the leading artists to the Highlands Plateau next April to share their talent and join us for another weekend of music and revelry under the canopy of the Blue Ridge Mountains.”

Bear Shadow, produced by Highlands Festivals, Inc. and Eleven Events, is a music festival named in honor of the bear-like shadow that appears behind the region’s Whiteside Mountain in the fall and spring. The festival features a variety of live musical acts for nearly any musical taste, from bluegrass and indie rock to country rock and soul.

After a nationwide search to create the 2023 Bear Shadow festival lineup poster earlier this year, Midwest-based graphic designer Brian Kingen’s design was selected as the winning entry. Kingen received a $1,000 cash prize, 4 tickets to attend the 2023 Bear Shadow festival weekend and booth space to sell his artwork throughout the event. Kingsen said he was inspired by the wildlife and nature of The Plateau, which he incorporated into his design.

Lissie: American singer-songwriter Lissie hails from Rock Island, Illinois, and has been in the industry since 2009. Since releasing her debut EP, “Why You Runnin”, she has recorded and released five studio albums. Her most recent, Carving Canyons, was released this past September and has been described by some as her best record yet. After dealing with a romantic breakup and COVID isolation in 2020 she created tracks that reflect on her own self-exploration while culminating rootsy and melodic pop beats.

Fruit Bats: This American rock band led by Eric D. Johnson has been making music for over two decades. Fruit Bats is noted as one of the first bands to enter the folk-rock boom of the early 2000’s. With influences such as the Grateful Dead and the reflective sound of icons such as Neil Young, Fleetwood Mac and Three Dog Night, Fruit Bats offers an exceptional live experience.

Spoon: Rock band Spoon, from Austin, Texas, released 10 albums in the last 26 years, slowly becoming giants in the indie/alternative scene. Front man Britt Daniel’s talent and determination has led the way up to the release of their most recent album Lucifer on the Sofa and the reworking of this album, Lucifer on the Moon, which was released this month.

Myron Elkins: At just 17 years old, Myron Elkins was set on making welding his career in his small hometown of Otsego, Michigan but found his true calling when a family member signed him up for a battle of the bands concert. The singer-songwriter is taking the Americana genre by storm and hopes to release an album in the early months of 2023. Elkins’ songs tell a story and are influenced by icons such as Johnny Cash, Waylon Jennings and Sturgill Simpson

Neal Francis: Singer-songwriter from Chicago, Neal Francis started playing the piano when he was four years old. With influences such as Allen Toussaint, the Rolling Stones, and the Who, Francis has crafted two studio albums. His most recent, In Plain Sight came to life after spending a year living in a rumored “haunted” church in Chicago. The album reveals “the possibility of redemption and transformation even as your world falls apart.”

The Head and the Heart: After meeting and forming through a series of open mic nights at a pub in Seattle, Washington, The Head and the Heart made a name for themselves with five studio albums. Bandmember Josiah Johnson explained the name of the band, saying, “Your head is telling you to be stable and find a good job, you know in your heart that this (the band) is what you’re supposed to do even if it’s crazy.” The indie folk band reached the Billboard Top 200 twice and one of their most popular songs, “Rivers and Roads,” has been featured in several shows, including “How I Met Your Mother”, “New Girl” and “The Good Doctor.”

Woody Platt & Shannon Whitworth: Singer-songwriter Shannon Whitworth and her husband Woody Platt, guitarist and lead vocalist of the Grammy award-winning Steep Canyon Rangers, have teamed together to bring Whitworth’s original compositions to the stage, as well as many of the couple’s favorite songs. Platt has one Grammy and three nominations, as well as 13 studio albums under his belt. Whitworth has toured and recorded with the iconic bluegrass band, The Biscuit Burners, and also enjoys selling her paintings.

Amythyst Kiah: From Chattanooga, Tennessee, Amythyst Kiah has found a way to combine her musical passion of iconoclastic alt-rock with her breakout success in the roots-old-time-music scene. Kiah was recognized by Rolling Stone as “one of Americana’s great up-and-coming secrets.” The singer-songwriter has released two solo albums and one EP. Kiah also earned a Grammy Award Best American Roots Song nomination for her song “Black Myself.”

Jason Isbell and the 400 Unit: After spending years as a solo artist, American singer-songwriter and guitarist Jason Isbell formed The 400 Unit, a band comprised of musicians from the Muscle Shoals, Alabama area.  The band has released numerous studio albums together and won a Grammy Award in 2017 for Best Americana Album.  Isbell has also won four solo Grammy Awards.  The band focuses on the importance of including their northern Alabama roots and have cited Neil Young, Ben Howard, and Blake Mills as big influences.

General Admission tickets include admittance to Bear Shadow Base Camp live performances for the specified days, complimentary beer, wine and premium non-alcoholic beverages, and coffee, access to a variety of food, sponsors and retail vendors on-site, and complimentary shuttles to and from downtown Highlands.

Winfield Farm is located about 7 miles from Main Street in Highlands, in Scaly Mountain, and organizers plan to provide continuous, complimentary shuttles from the Town of Highlands.

In addition to the three-day lineup of musical headliners, exclusive excursion activities and additional musical performances are also included throughout the weekend festivities, including:

Embark on a guided journey, led by conservation experts, through Highlands’ forests and trails and finish your afternoon hike by enjoying intimate performances by Bear Shadow artists. These are moderate to strenuous hikes. Patrons should come prepared for a 1-2 mile trek and dress for weather and conditions. Tickets are $70.

Enjoy an exclusive half day fly fishing experience on private waters, guided by The Brookings and Musician and Angler, Woody Platt, of the Steep Canyon Rangers. Tickets are $500.

Sarah Frick, owner of The Works – Charleston’s Sweat Studio, will lead a one-hour flow in downtown Highlands so you can sweat before the music. This class is complimentary, but students must reserve their spot online starting November 16th.

Enjoy learning techniques and rifts from Bear Shadow artists. Locations and times to be announced. Tickets are $25.

All events are rain or shine. However, in the event of severe inclement weather, event organizers reserve the right to cancel individual performances or events in order to maintain optimal safety for all attendees, staff, talent, and vendors. For more information, visit bearshadownc.com/information/.