The Cashiers Area Chamber of Commerce salutes the men and women who’ve brought their energy and their talents to the task of making the Plateau a wonderful place to live and visit. 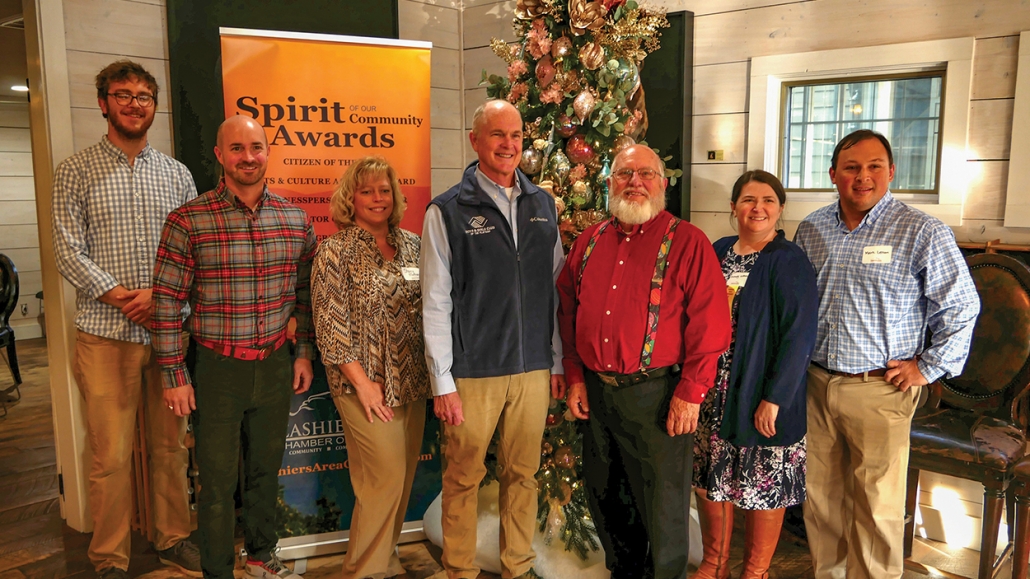 Left to Right: Carter Giegerich/Junior Appalachian Musicians-Arts & Culture Advocates of the Year,
Drew English-Evergreen Award Winner, Stacy McNabb-Educator of the Year, Nat Turner-Citizen of the Year,
Ralph Campbell-Volunteer of the Year,
and Brandy and Mark Letson/Cashiers Valley Pharmacy-Businesspersons of the Year

The Cashiers Area Chamber of Commerce recently awarded their 2021 Spirit of Our Community Awards recognizing well-deserving individuals who dedicate their lives and talents to positively influence the Cashiers, Glenville, Lake Toxaway, and Sapphire communities.

Chamber Executive Director Stephanie Edwards explains that the Spirit of Our Community Awards shine the spotlight on people who truly represent the character of the Cashiers Area.

“They are our friends, neighbors, teachers, business owners, non-profit advocates and others who give beyond what is simply asked,” she says.

Nat Turner, President of the Board of Directors for the Boys and Girls Clubs of the Plateau, was named Citizen of the Year.  Under his watch, the club raised capital to construct an impressive and expanded campus.  Additionally, he is a thoughtful leader of Vision Cashiers/Crossroads Society and is a first responder with the Glenville Cashiers Rescue Squad.

Ralph Campbell, often considered the “Unofficial Mayor of Glenville,” was honored as Volunteer of the Year.  He has touched many lives through his work as Pastor of the Glenville Wesleyan Church, as the former Chaplain of the Highlands-Cashiers Hospital and Eckerd Living Center, and as President of Glenville Community Development Club and Glenville Historical Society, among many other causes.

Recognized as Educator of the Year was Stacy McNabb, a Lead Teacher at Blue Ridge Elementary and Blue Ridge Early College.  During her 26-year career as an educator, she’s worn many hats including teaching kindergarten, combination classes and sixth grades, served on numerous committees, coached volleyball and mentored new teachers.

Brandy and Mark Letson of Cashiers Valley Pharmacy were honored as Businesspersons of the Year, proving themselves more than just business-owners,  but also generous members of the community. Their contributions and donations are many but especially during the Covid-19 Pandemic they provided exceptional services, resources, and comfort to our community.

The Evergreen Award went to Drew English, a man with a green thumb and a big heart, whose horticultural and artistic efforts have enhanced our landscape.  In addition to managing the Dahlia Garden at High Hampton, he spearheaded the campaign to upgrade the Village Lights Holiday Display.

The Blue Ridge Chapter of Junior Appalachian Musicians, under the direction of Carter Giegerich, were named the Arts and Culture Advocate of the Year award.  The program enhances the lives of local children through music, offering lessons for students grades 3 through 12 on a variety of instruments.

The Spirit Award winners were featured in the annual Cashiers Christmas Parade, applauded with a reception for recipients and sponsors in their honor, recognized in other publications and social media posts and celebrated by their friends, families, and colleagues across the Plateau.

Coffee and cookies for the reception were compliments of Steve and Stephanie Miskew, new owners of Buck’s Coffee Café.