Though she’s updated its appearance and tweaked its stable of artists, Susan Whiteside Williams has preserved her father’s generous animating spirit in The William Whiteside Art Gallery. Discover for yourself at 1057 US 64 West in Cashiers or visit whitesideartgallery.com 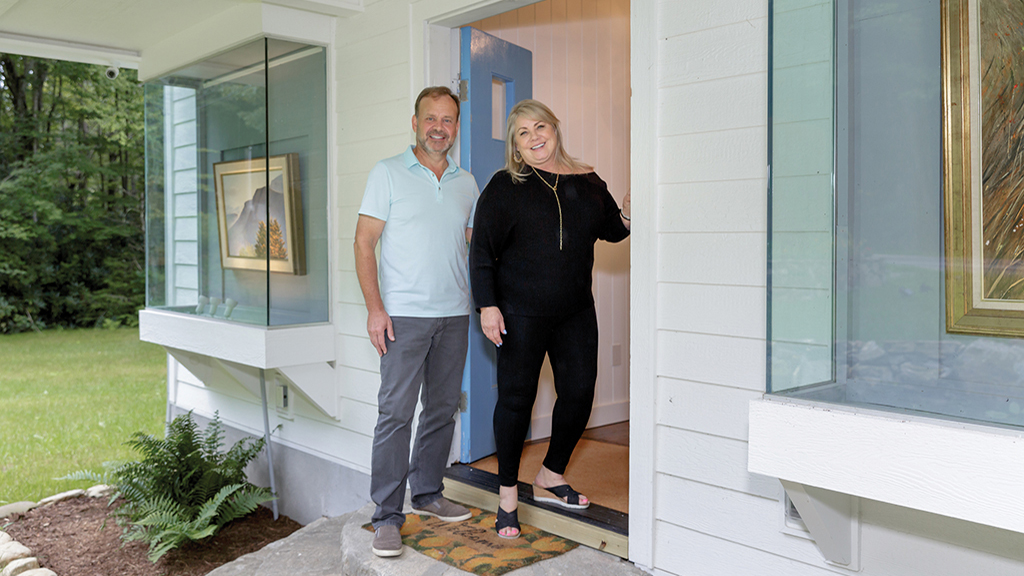 Artist William Whiteside and most of Cashiers were ambling along a temporarily closed Highway 64.

It was a unique parade, reminiscent of an old-fashioned barn-raising. Friends and family, many with toddlers and dogs, strolled alongside seven pieces of a church (sectioned for easier transport) that Whiteside had recently purchased.

Whiteside was the only sealed bidder, so it was meant to be. Cashiers Baptist built a new brick building and retired the small white church in the early 1960s. William, known as Bill to most, rented it in the summers for teaching art lessons. So when the church was placed on the market, it seemed natural for him to purchase, move it, and start the William Whiteside Art Gallery in 1976.

Over time it became a landmark. In 2014 Whiteside finally retired.

This year his daughter, Susan Whiteside Williams, re-opened the Gallery along with her husband, Peter, who recently retired from The Coca-Cola Company.

While it retains its historic essence (much of it built in 1865), Susan has contemporized its look and its feel: beautifully textured walls, wow-floors, antique doors, all accompanied by welcoming music and state-of-the-art lighting.

She’s broadened its stable of artists to include accomplished painters from the Southeast to California to Bulgaria. With the new artists comes a more contemporary, impressionistic style.

Susan was groomed for the job. The youngest of three children, she was bundled up (older brothers left at home) and carried along on show-judging exhibitions. Her dad would point out painters’ successes and failures, then ask Susan for her opinion.

Over time, she became quite the critic. Her immersion in the arts early-on introduced her to the Wyeths (in person) and other art icons.

After her dad retired, she missed the energy of that artistic crowd.

After two years of renovations it was time to host a grand re-opening in Cashiers. Sales the first week the gallery doors swung open wasn’t just successful – they were a triumph. In the first 10 days (July 2021) an impressive number of high-end works and commissions were sold.

Or perhaps it’s the beautiful setting and the knowledgeable staff.

Most likely, it’s a delicious combination of all the above. A century of Whitesides, with one wide stroke, leaves its artistic mark on the world.

Visit whitesideartgallery.com to view times and events. Sign up for email gallery news. And don’t miss Thursday Evenings with the Artist, 6:00 to 8:00 P.M.

Cheers to the last month of Summer! What outdoor s