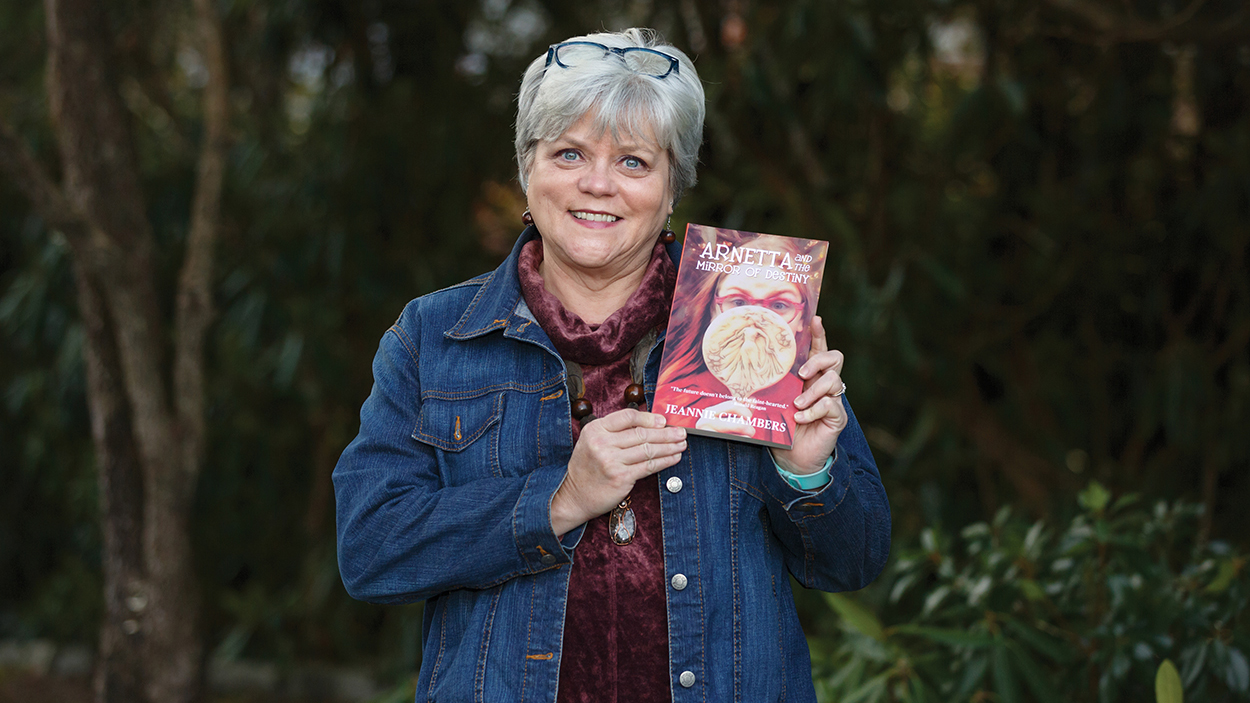 Jeannie Chambers’ latest book explores the perils and possibilities of glimpsing the future. Arnetta and The Mirror of Destiny is available locally as well as on Amazon.

If you could see something in the future would you be more careful with the present? That is the plot premise of Arnetta and The Mirror of Destiny: The Future Doesn’t Belong To The Faint Hearted. Author Jeannie Chambers, The Laurel’s “Accidental Gardener” for the last six years, released this second book in September; her first was Tunnel of Time (2017).

A real estate broker partner with her husband, Tucker, and a vacation rental manager, Chambers has always been an avid reader and a prolific writer.

“My parents told me more than once, ‘You can go anywhere in the world you want, any time you want, just by reading a book,” she says. “I don’t mind getting lost if it’s in a good story.”

With her two books, Chambers has focused on writing stories that make readers think and that “tickle their inquisitive bones where the only way to satisfy that itch is to read more and more.” Inspiration for her stories started with her children, now grown, and continue with her grandchildren.

“I’ve just been writing stories for as long as I remember,” she said.

Of the fantasy fiction genre, Arnetta and The Mirror of Destiny: The Future Doesn’t Belong To The Faint Hearted spotlights a 16-year-old character, Arnetta, who desires more than anything to be a part of a family. The time period is 1985, and although Arnetta resides with her grandparents in a small, southern textile mill town in South Carolina, she always feels like something is missing. When she has a chance encounter with an antique store owner, a ripple effect occurs that enables Arnetta to see future events through a special mirror. At its core, the book is the “journey of a teenager who learns that knowing certain things can be beautiful, but also heartbreaking, dangerous, or deadly,” explained Chambers.

Arnetta and The Mirror of Destiny: The Future Doesn’t Belong To The Faint Hearted can be found  locally at The Book Nook on Main Street, Highlands and Books Unlimited on Main Street in  Franklin. Also available online at Amazon, Books-a-Million, and WalMart.com. Chambers said she would love to connect with readers through Facebook, Instagram, and Twitter.