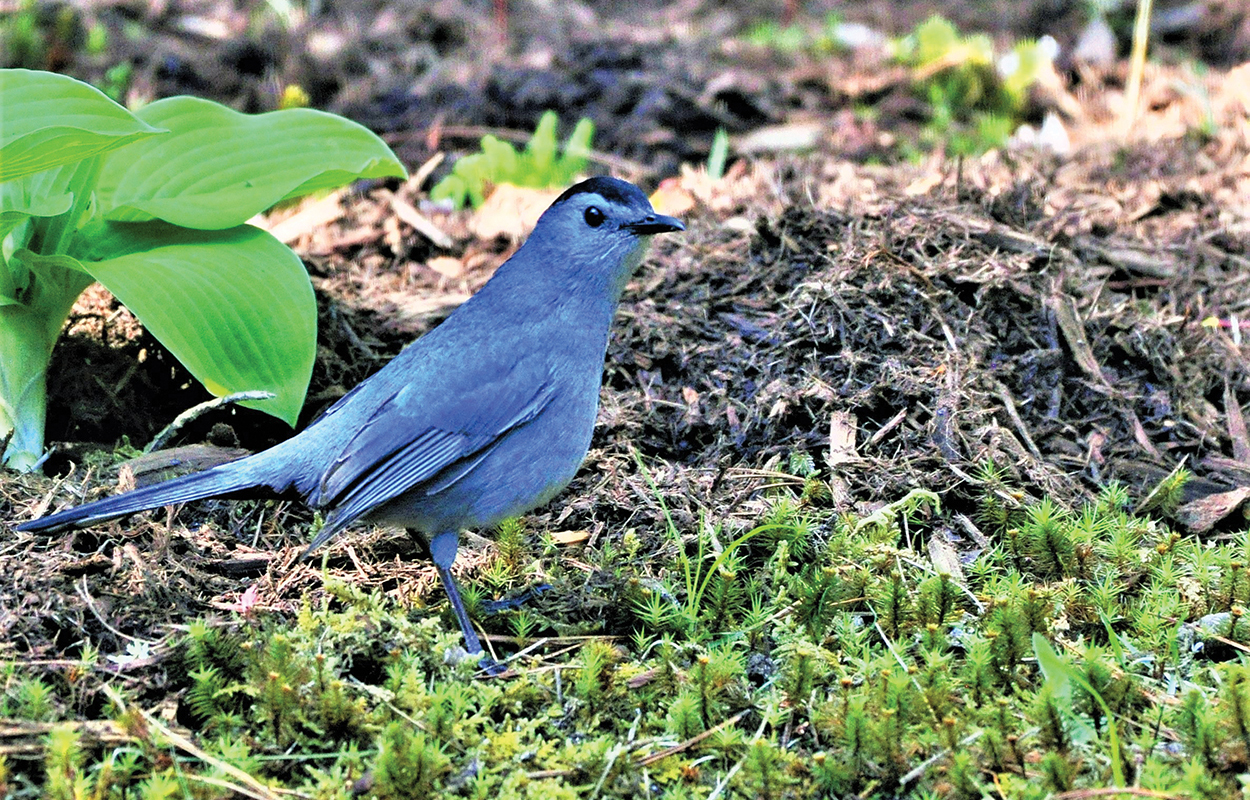 The Gray Catbird’s distinctive call and elegant plumage make it a natural charmer.

The Gray Catbird get its common name from its distinc-tive vocalization that sounds like a cat’s mew. Notsomewhat like a cat’s mew, the call is a clear feline“mew.” Prepare to be surprised.The catbird’s formidable Latin name isDumetella carolinensiswhich refers to its being a small thornbush dweller in theCarolinas. Yes, it’s a Carolinian. Not our state bird but an aviannamesake and backyard delight.This neotropical migrant, protected by the reinstated MigratoryBird Treaty, is widespread and plentiful in the eastern andnorthern U.S. and Canada. Catbirds that breed in the upperMidwest winter in Central America. Those that nest in the mid-Atlantic and New England winter in Florida and the Caribbean.Their plumage is as pictured: lead gray with a black cap, blackbeak, eyes, legs and feet. Rarely seen is a chestnut red patchunder the long black tail. Females are indistinguishable frommales except in nesting behavior. The nest, a cup near groundlevel in the woods, holds two or three light blue eggs. Bothparents feed the hatchlings.Catbirds eat berries and fruit, making up 50 percent of theirdiet, as well as insects and seeds. They forage at ground levelin leaf litter, shrubs and bushes. Offer them soaked raisins ororange slices and you will make their day.These birds are first cousins to mockingbirds. Their songs andcalls are similar to those of mockingbirds with two exceptions.First, catbirds mew and that is an unmistakable field sign.Second, mockingbirds repeat vocal phrases and catbirds do notrepeat. Catbirds have a vocal repertoire of 100 different sounds.Its long and varied song can last 10 minutes. Like mocking-birds, they are profuse imitators of other birds.Ornithologists have theorized that extensive vocal mimickingmakes males attractive to females as a sign of “having beenaround.” Come to think of it, some human females are attractedto human males who can sing Italian, French and German arias.Such is the singular fabric of life!Birds and birders are natural social distancers. Watch thebushes and shrubs and listen for the characteristic “mew” tospot this bird.The mission of the Highlands Plateau Audubon Society is toprovide opportunities to enjoy and learn about birds and otherwildlife and to promote conservation and restoration of thehabitats that support them. HPAS is a 501(c)(3) organization, aChapter of the National Audubon Society. Visithighlandsaudu-bonsociety.orgfor information on membership and all activities.