Our Most Beautiful Songster

The stately Wood Thrush have returned for the Plateau’s summer, and they announce their presence with a lilting song that echoes through the forest. 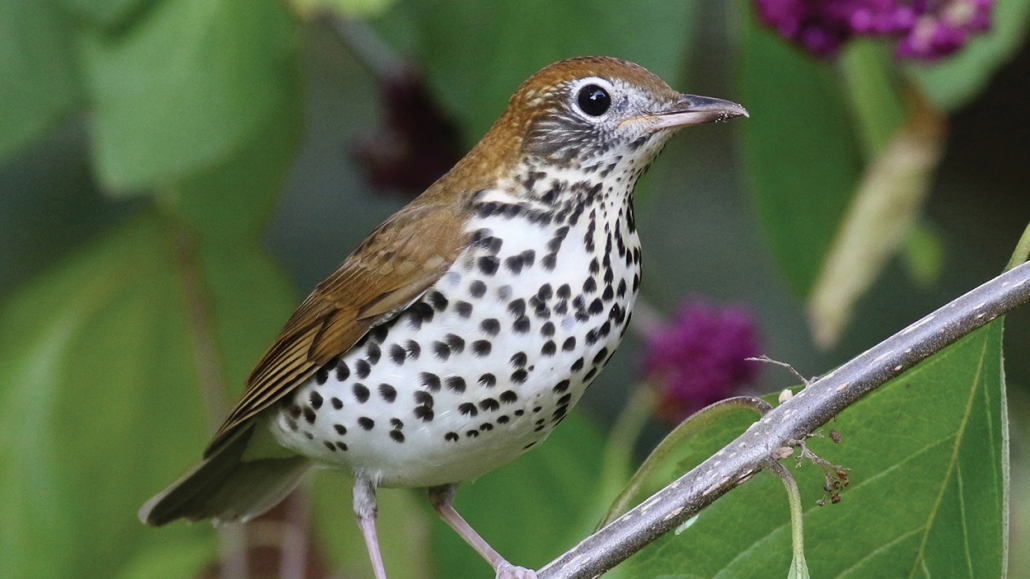 This summer resident in our forests is not to be missed. The Wood Thrush (Hylocichla mustelina) has resplendent beauty, stately carriage and a song of several verses, each topping the last with soaring flute notes.

They are difficult to see but easy to hear. Both sight and sound are sylvan delights.

Wood Thrush are medium-sized birds, not as large as their cousins, American Robins. They have protruding breasts and bellies, both white with elegant black spots and streaks. The plumage on their backs is a rich cinnamon brown. They have distinctive white eye rings and pink legs. Males and females sport similar plumage. Only the male sings.

These birds are widespread in North America. They are migratory and spend winter months in southern Mexico and Central America. It is the official bird of the District of Columbia.

The Wood Thrush habitat is the understory of dense deciduous and mixed forests. Being ground feeders, they forage among the decaying leaves for insects, larvae and other organic tidbits. They burrow under the blanket of moist leaf matter and pop up every now and again to look around.

These striking birds spend most of their day on the forest floor in the shade of the canopy but at dawn and dusk male Wood Thrush take to the treetops to broadcast their singular, clarion song. This song begins with soaring flute notes, punctuated by trills and buzzes, that goes through several verses, each harmonizing with the last.

Listen for clear, rising notes followed by a distinct buzz, a moment of silence followed by another flutist excursion reaching new heights, other verses of the same sort, ending in what could be described as the rasping of a snare drum. Difficult to describe, the Wood Thrush song is orchestral and complex. With split vocal cords, they can sing two notes at once. The beauty of this song arguably occupies the same top position among perching birds that the loon’s melancholy yodeling occupies among waterfowl.

Wood Thrush pair-bond each year in April or May, a mating ritual that involves the male and female chasing and feeding each other. The female then builds a nest in dense tree branches or scrubs and lays 2-4 pale blue eggs. Incubated by the female, the hatchlings appear in two weeks and are then fed and tended to by both parents. Fledging takes place two weeks after hatching.

Happy June birding from the Highlands Plateau Audubon Society. Listen for these birds singing from the treetops just before dawn and again at sunset. Your effort will be richly rewarded.