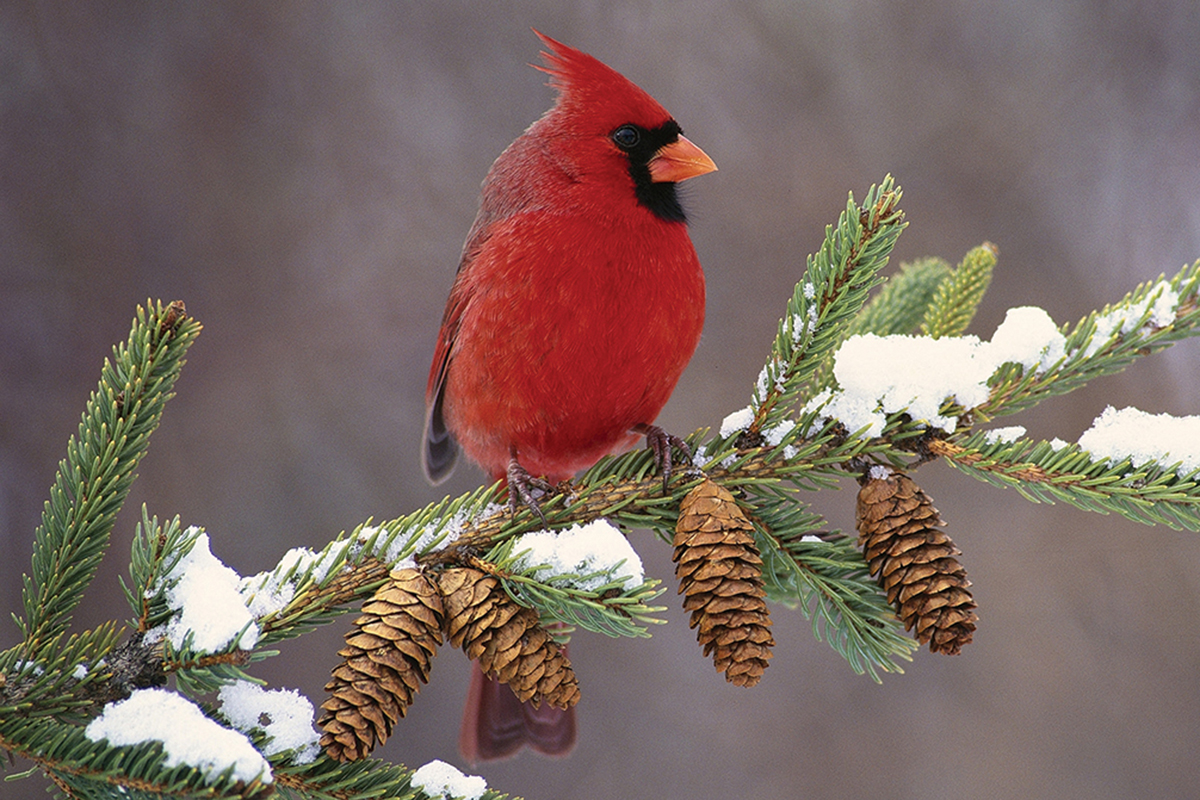 This bird is close to the human heart, the state bird in seven states.  We revere Cardinals and have made them mascots of innumerable sports teams from kindergarten to the major leagues including the St. Louis, Arizona, Ball State, and Wesleyan Cardinals.  We take them as totems and even have a College of Cardinals, appropriately attired, in the hierarchy of the Catholic Church.

Cardinals are among the most depicted songbirds — How many Christmas cards, sealed with holiday hope and good cheer, have been sent sporting an image of a male Northern Cardinal on a snow-covered pine branch?  The photo above is a favorite desktop background.

The male Cardinal will examine you closely with a cocked eye and lowered shoulder.  His distinctive call is a high, crisp tik tik or a softer rising twik.  His clarion song, a piccolo outburst amidst silent gray tree trunks, is a broadcast announcement of location and intention.  According to Sibley this is a “series of high, clear, sharp, mostly slurred whistles woit woit woit chew chew chew chew chew or pichew pichew tiw tiw tiw tiw tiw tiw with many variations.”  It is a very musical declaration.

Unusual among songbirds, the female of the species sings as well as the male.  Her summer song is more subtle and complicated than his.  She will sing while on the nest, signaling her attentive mate to bring food in the form of seeds and berries.

Cardinals form strong pair bonds and become endearing couples.  They are often seen together, always him in the lead, both avid tail flippers.  They are attentive parents.  She constructs the nest with him bringing her twigs and vines and he subsequently feeds her beak-to-beak as she tends their clutch. Some pairs stay together during the winter and mate again in the next spring and summer.

Cardinals occupy backyards and parks and forest edges across the Eastern U.S. from Maine to Florida and west to Colorado and Arizona.  Cardinal pairs live just above ground in shrubs and bushes and low-lying branches. The oldest known Cardinal lived to be 15 years and 9 months old, impressive for a winter resident.