Burnished by time, Marlene’s Thanksgivings with her beloved Louis still shine with an almost blinding intensity. 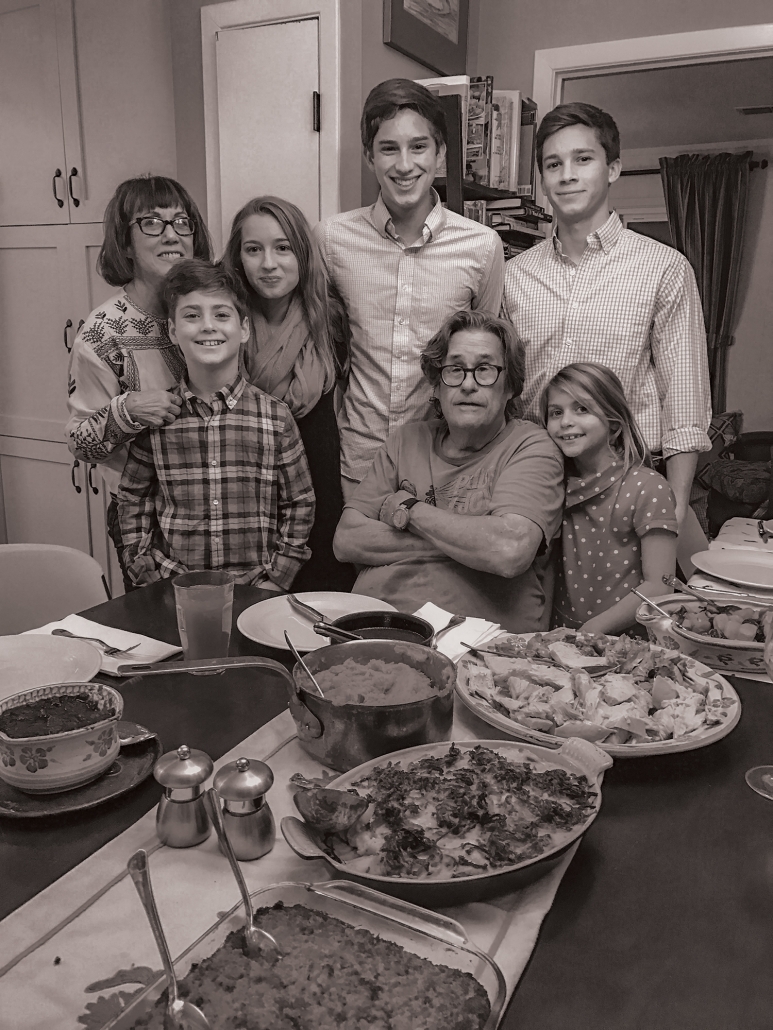 Marlene and Louis (Standing, far left) with the Johnstons Thanksgiving 1992

I think about Thanksgiving a lot – even when it’s not November.

It was my husband, Louis’s favorite holiday for sure – when food could be celebrated, and family cherished – a day in the year and a stop in time when the two things he held most dearly could be feted properly.

When I close my eyes, I am again in the moment – it’s Thanksgiving. I can hear the sounds – bluegrass and blues blaring, little giggles and loud guffaws, a knife chopping, bubbles exclaiming on the stove, sizzling oven noises.  And then there are the sights – tables heaped with silverware and plates and flowers, children grinning, grown-ups chattering, and overseeing it all my husband – Louis.

He is wrapped in a long, white apron, brandishing tongs and the expression on his face stops me.  What am I seeing?  I grab for the words to describe his countenance, and I understand at last.   He is radiating the most sublime contentment – he is in his element. I am so awash in the moment.

Watching from my memory perch, I see our first Thanksgiving – it’s 1975.

We had met the year before – the result of an unlikely series of events that entailed us vying for the same babysitter – our three girls then toddlers.  Louis was a young, fledgling chef working his first culinary job at what was often described as “Atlanta’s finest restaurant.” It was a jewel of a French spot, run by a gifted but persnickety and occasionally ornery Frenchmen – Francoise Delcrosse. (Ultimately, he became Louis’s mentor and good friend.)

For some reason that was never clear to me, Louis invited Francoise to our Atlanta apartment for Thanksgiving dinner. I recall, a few days earlier coming home to discover, alarmingly, a white tub in the sink, filled with pale carcasses floating in a pool of purple liquid. It turns out they were rabbits marinating in red wine.  They were being made ready for the Thanksgiving table – to be served alongside the turkey.

Francois brought the wine – “white Burgundy for the ladies, red Bordeaux for the men.” For dessert – Tart Tatin (a French apple pie).  And because it brought forth praise from Francois – “not too sweet,” it was forever a tradition at our holiday feast.

That was also the first year that Louis’s dear friend Warren Johnston joined the table – in the years that followed he (and subsequently his wife Sandy) enjoyed more than two dozen Thanksgivings with us.

There are so many dear and tender moments. Like many families, the table(s) changing over the years – wine glasses displacing sippy cups, chairs added for sons-in-law, then more chairs for grandchildren and sippy cups re-appearing, only to disappear once again.

Always room at the table for friends and displaced co-workers – until we shared our last Thanksgiving in 2018.

It was celebrated, as it should have been, with children and grandchildren, and once again with the Johnstons.